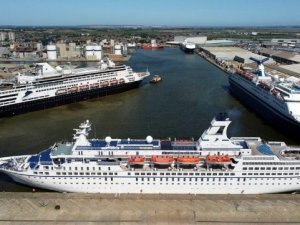 Cruise and Maritime Voyages, a cruise operator focusing on the British market, was placed in receivership late today. This ends several weeks of the cruise line struggling to find financing to help it manage through the global suspension in the industry.

It also makes them the third cruise operator to go out of business in less than a month.

A notice posted to the company’s website late today reads, “We are sorry to inform you that South Quay Travel Limited (“SQTL”) – which traded under the name Cruise & Maritime Voyages – was placed into administration on 20 July 2020. Paul Williams, Phil Dakin and Edward Bines of Duff & Phelps Ltd. were appointed Joint Administrators of SQTL. At present the Administrators are evaluating SQTL’s financial position.”

In recent weeks there had been growing reports of the financial difficulties faced by the line. In mid-June, the UK Maritime and Coastguard Agency (MCA) detained five of the company’s six cruise ships, the Astor, Astoria, Colombus, Vasco da Gama and Marco Polo, at ports in the U.K. CMV's sixth cruise ship, the Magellan, was not detained. According to the MCA, its surveyors found expired and invalid Seafarers Employment Agreements, late payment of wages, and seafarers who had been on board for over 12 months all in breach of the Maritime Labour Convention (MLC).

Crew members were reported stranded unable to return home due to the travel restrictions related to the coronavirus. For a brief period, some of the Indian nationals onboard staged a demonstration to attract attention to their plight. The International Transport Workers’ Federation (ITF) later stepped in saying it was working to assist the approximately 1,500 crew members from countries including Indonesia, India, Myanmar, and Mauritius to return home.

CMV had rapidly expanded in the past few years with booking offices in the U.K., France, Germany, Australia, and the U.S. The company’s fleet also grew acquiring older ships from Carnival Corporation. They currently own five of the cruise ships, with a sixth the Astoria operating on a charter that was due to end in 2021. In addition, the company had agreed to acquire two additional ships in 2021 from Carnival’s P&O Cruises Australia. Carnival Corporation had recently included those ships in the calculation for its fleet downsizing. It is unclear if those two ships would be involved in the administration of the operations.

CMV becomes the third cruise and passenger ship operator to go out of business as a result of the pandemic. Spain’s Pullmantur Cruises announced that it was insolvent a month ago with its three cruise ships repossessed by the Royal Caribbean Group, which had been an investor in the company. Royal Caribbean has reportedly sold those cruise ships for scrap.  At the beginning of July, short cruise operator Birka Cruises based in Sweden also announced that it was going out of business.

The receiver for CMV have posted claim forms on the company’s website but are telling people who are still holding reservation that they should be protected by ABTA or from the small number of people who purchased flight-inclusive packages those are protected by the CAA’s ATOL scheme.

CMV, like all cruise lines, had announced it would suspend operations in March. At the time, two of its cruise ships were in the Indian ocean and the line undertook an unusual off-shore transfer of passengers and their luggage between ships at sea. One cruise ship was used to transport passengers home to Australia while the other began a long ocean voyage via the Suez Canal home to the U.K. All of the ships are currently laid up in the U.K.

In a statement obtained by the British newspaper The Sun, Christian Verhounig, CMV’s CEO thanked their loyal customers and employees. "The directors have all worked tirelessly with CMV's financial advisors, investment bankers, lawyers, and numerous private equity and hedge fund investors to try and secure the funding required to enable CMV to weather the storm.” The company however had been unable to secure financing to continue operations. 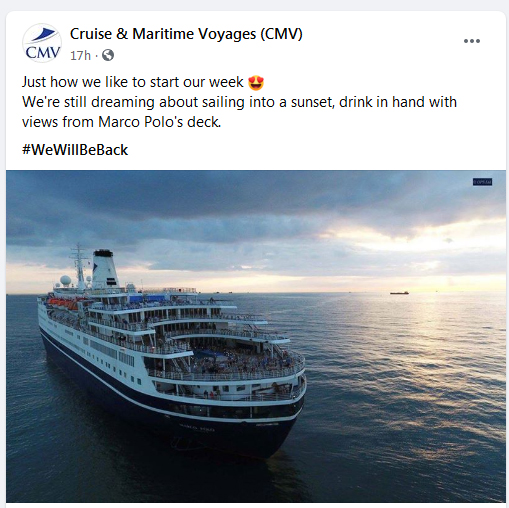 This news is a total 2116 time has been read
Tags: CMV Becomes , the Third Cruise Line , To Go Out , of Business in a Month, CMV , Cruise and Maritime Voyages