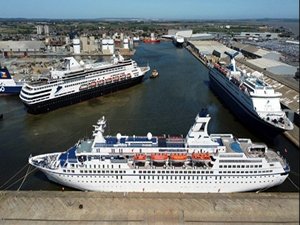 Seven weeks after the UK-focused cruise line Cruise and Maritime Voyages collapsed due to the pandemic and went into administration, a British court has ordered the sale of the cruise ships the company formerly marketed.

News of the court-ordered sale to satisfy debts saddened many of the cruise line's former passengers but came as the former head of the company has taken steps to potentially rebuild the operation.

Cruise and Maritime Voyages, known as CMV. was the marketing, travel agency portion of the business, and the face to consumers. The ships were owned by separate companies under the umbrella of the Global Maritime Group based in Greece.

Started in 2009 when another cruise operator went into bankruptcy, CMV focused on the UK market operating older, smaller ships as well as operations in Germany and Australia and marketing in the US. The company based its appeal on the style of the ships and attractive pricing with no-fly cruise options. CMV had also worked to build a market in Mexico and recently was pursuing France with plans to position one of its smaller ships into that market.

CMV also had a;sp been moving aggressively to grow and modernize its operations. In recent years, they had acquired three ships from Carnival Corporation, including two from P&O Cruises Australia. They had also announced that they would take delivery on two more cruise ships from Carnival’s P&O Australia line in 2021.

CMV’s financial collapse came about as a result of the pandemic and the pause in cruise operations. In June, five of the company’s cruise ships were detained by the UK’s Maritime and Coastguard Agency, with reports of crew welfare issues and unpaid wages. In July, the company was reported to be scrambling for additional financing and when a deal could not be completed, CMV was placed in administration. The cruise ships, five of which were owned by Global and a sixth under a long-term charter, were impounded. Reports said there was a growing list of creditors ranging from the mortgage holders, which includes Carnival Corporation, to unpaid fuel bills and wages.

The pending auction of the ships follows the sale at the end of August of the primary assets of the travel agency portion of the business. The administrator reported that due to the impact of the pandemic that they had been unable to find a buyer for the business. Instead they recommended selling assets, including the computer systems with the database, website, and booking system, along with the company’s intellectual property and some tangible assets, to a new company founded by Christian Verhounig, who formerly headed the CMV operation. The Joint Administrators are expected to issue a Statement of Proposals shortly which will provide an update on the progress of their efforts.

“The global pandemic had a devastating impact on CMV’s once flourishing, expanding and profitable business,” said Verhounig. “The acquisition of the UK commercial assets provides a positive first step and we believe demonstrates our firm commitment and optimism to return much stronger and to work alongside our loyal suppliers and creditors to also help mitigate the pandemic impact.”

Many of the company’s loyal passengers were saddened to hear the news of the pending auctions and fear that the ships due to their size and age, compounded by the pandemic, are likely to be sold for scrap. “My wife and I prefer the classic ocean liners. We were sad to hear a couple of ships we have been booking on repeatedly - MS Marco Polo and MS Astoria (the oldest cruise ship still operating in the world) - appear to be on the way to be scrapped,” writes Mark Lansbury. He is so concerned about the fate of the ships that he started a petition drive (petition.gppixelworks.co.uk) to show potential buyers passengers’ loyal to the ships by asking people to sign the petition to demonstrate their interest in continuing to sail on these classic ships.

Depending on the pricing, many observers predict that Carnival Corporation may be a bidder for the three ships, Vasco da Gama, Columbus, and Magellan, due to the outstanding financing it provided to Global for the acquisitions. It is unclear if Verhounig may be seeking to repurchase some of the ships as part of a potential restart to the company. The oldest ship CMV marketed, the Astoria built in 1948 has attracted a lot of attention due to its heritage as the Swedish Stockholm that became famous when it collided with and sunk the Italian liner Andrea Doria in 1956. The Astoria was on charter to CMV as she is owned by a Portuguese bank. She has been excluded from the upcoming auctions.

This news is a total 2110 time has been read
Tags: CMV's Cruise Ships Ordered Auctioned as Former CEO Acquires Assets