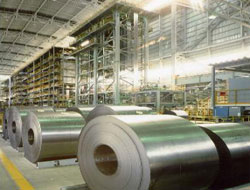 It is reported that during China's National Day holiday, international coal price plunged along with the sharp decline of international oil price.

It is reported that during China's National Day holiday, international coal price plunged along with the sharp decline of international oil price.

Since mid September, international steam coal price has been falling, finally coming down to the lowest point in six months.

Statistics of Globalcoal showed, by October 3rd international coal price had declined to USD 121.17 per tonne, USD 40 per tonne lower than a month earlier.

Although there's no sharp drop in China's domestic coal price, downstream demand growth has obviously slowed down under the government's macro-control.

In Qinhuangdao port, China's largest port, coal stock has long been piled up, and its steam coal price has inched down for four consecutive weeks.

Experts predict that although domestic coal demand has weakened, coal price will continue to remain high amid the necessity of storing coal in winter, the tight transport and the climbing cost. In the coming coal-storing period, coal price will be determined by those competent enterprises.

In due time, coal price might stabilize in one month, and in two months, it will probably rebound. Besides, given the large gap between the negotiated and actual price, power coal price is likely to go up next year if there's no sharp decline in this year's market price.

This news is a total 1915 time has been read