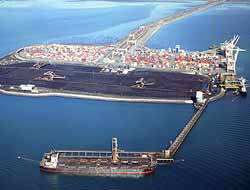 Coal shipments from its Indonesian subsidiary would be delayed after Jakarta ordered a temporary production halt.

Coal shipments from its Indonesian subsidiary would be delayed after Jakarta ordered a temporary production halt.

Thailand's Lanna Resources said on Monday coal shipments from its Indonesian subsidiary would be delayed after Jakarta ordered a temporary production halt due to recent heavy rains.

"Contracted coal shipment and delivery schedule of approximately 95,000 tonnes for January 2009 shall be deferred to later date," the Thai firm said in a statement. PT Lanna Harita Indonesia, which operates a coal mine in East Kalimantan, was expected to resume operations by mid-January, Lanna account manager Petcharat Chayanon told.

The government ordered a temporary halt after heavy rains weakened the soil around inactive mine pits and affected a nearby village.

But the shutdown would not affect its delivery for 2008 because PT Lanna Harita had sufficient inventory and was allowed to export coal from its stockpile, the statement said.

Lanna would delay a plan to open another mine in Indonesia into the first quarter from the fourth quarter after its construction contractor had a financial problem, prompting Lanna to hire a new construction firm, Petcharat said.

Lanna plans to open the new one to help ease the impact of the forced closure of one of its existing mines there. The opening had been delayed from earlier this year due to heavy rains in Indonesia, where the company operated two coal mines.

In July, an Indonesian court revoked the licence of one of its two mines in the country.

Lanna was expected to produce about 2 million tonnes this year and should rise to 2.5-3.0 million tonnes next year if the third mine is opened as planned, Petcharat said.

Coal prices were expected to rise to $50 per tonne this year, up from about $30-34 last year, which should help boost Lanna's revenue, she said.

This news is a total 888 time has been read