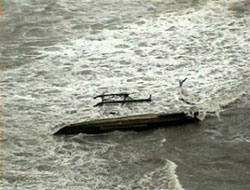 Coast Guard and rescue workers in the Philippines have continued to search for up to 26 people feared drowned in a weekend ferry disaster.

Coast Guard and rescue workers in the Philippines have continued to search for up to 26 people feared drowned in a weekend ferry disaster.

Coast Guard and rescue workers in the Philippines have continued to search for up to 26 people feared drowned in a weekend ferry disaster as a coast guard cutter went missing as it was responding to another shipping casualty.

More than 30 passengers on board the small inter-island vessel Maejan died after the ferry capsized and sank about 50m offshore from Pallog in the north-eastern province of Cagayan on the main island of Luzon.

Rescuers managed to save 45 people on board the ferry which was carrying 101 passengers, more than double the 50 it was legally allowed to carry.

Coast guard vice admiral Wilfredo Tamayo said criminal charges will be lodged against those who allowed the ship to sail, although the owner of the ferry and her daughter were among the dead.

The Maejan sailed even though the Office of Civil Defense issued a gale warning early on Sunday morning which was intended to prevent ships putting to sea from ports in northern Luzon.

?The advisory said small vessels should no longer set sail. We issued a warning as early as 0500 hrs so when Maejan left at 0930hrs, they should have been fully aware of the gale warning. It should not have left port,? civil defence executive officer Ronald Flores said in press briefing yesterday:

The gale force conditions were caused by Typhoon Ulysses which is continuing to affect the area even though the storm had turned north towards Japan.

Coast guard commandant Wilfredo Tamayo told local media: ?The rescue ship was battered by waves and we lost our contact to the crew members."

The BRP Nueva Vizcaya was found by a helicopter and other rescue ships drifting off Sibay island near the tourist resort of Boracay, after crew members used their mobile phones to alert authorities.

The ship was searching for the Lourdes, which was carrying a cargo of cement when it sank around 2100 hours Tuesday off Caluya island in the province of Western Visayas. One seafarer was killed although the other 19 were rescued by a nearby vessel.

This news is a total 752 time has been read