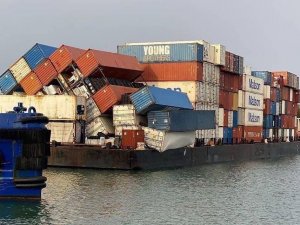 The Coast Guard continues to investigate the loss of 21 shipping containers from the barge Ho Omaka Hou off Hilo, Hawaii.

All cargo was successfully removed from the barge over the weekend and it returned to Honolulu Monday, where a further damage assessment is being conducted.

Twelve containers of have still not been located.

Nine of the initial 21 containers have been found. One was located north of Hilo and sank. One washed ashore at Onomea beach, where it was refloated and towed to Hilo Harbor. The rest were recovered to Hilo Harbor and were removed from the water.

The incident began early in the morning on June 22 when the operator of the tug Hoku Loa reported to the Coast Guard the loss of containers from the barge Ho Omaka Hou as they transited from Honolulu to Hilo Harbor. Coast Guard watchstanders issued a broadcast notice to mariners to alert any traffic in the area to keep a lookout for any containers.

The Coast Guard and the National Transportation Safety Board are investigating the cause of the incident. Both agencies are expected to produce their own summary of findings.

The Ho Omaka Hou barge is owned and operated by Hawaii-based Young Brothers, a leading interisland freight company and independent subsidiary of Foss Maritime Company, which is wholly-owned by Saltchuk Resources.

The Coast Guard said Young Brothers has worked cooperatively to address the situation and is conducting an independent investigation. The State of Hawaii Department of Transportation – Harbors Division has also assisted in cargo operations at the pier in Hilo.

This news is a total 1890 time has been read
Tags: hawaii, ho omaka hou, ntsb, USCG