Coast of Somalia out of control 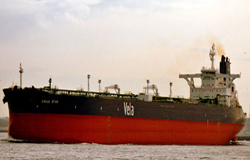 Speaking from the tanker, which is moored off the Somali coast, Mohamed Said said: "We are demanding $25m from the Saudi owners of the tanker."

"The Saudis have 10 days to comply, otherwise we will take action that could be disastrous."

A man who claimed to represent the pirates gave the Saudis 10 days to comply with the demands and warned that a refusal "could be disastrous".

Speaking from the tanker, which is moored off the Somali coast, Mohamed Said said: "We are demanding $25m from the Saudi owners of the tanker. We do not want long-term discussions to resolve the matter.

"The Saudis have 10 days to comply, otherwise we will take action that could be disastrous."

Negotiations were already underway between the owners of the tanker and the pirates.

The pirates first appeared on Al-Jazeera television to demand a cash sum in exchange for the return of the Sirius Star tanker, its cargo and crew of 25.

The crew includes two Britons, who have been named as Peter French, from County Durham, and James Grady, from Strathclyde. Their families have pleaded for their safe return.

News of the negotiations describes the situation off the coase of Somalia as "out of control".

Saudi Arabia's foreign minister, Prince Saud al-Faisal, said countries do not like to negotiate with terrorists or hijackers but the final decision rested with the owners of the ship.

He said: "I know that the owners of the tanker, they are negotiating on the issue."

Meanwhile Russia has announced it will send more warships to combat piracy in the waters around Somalia.

He added: "This is needed because of the situation that has developed in the vicinity of the Horn of Africa and the Gulf of Aden, where Somali pirates have sharply increased their activities."

According to local officials it is now anchored at the Somali pirate lair of Harardhere.