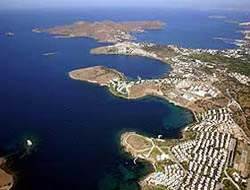 More than 30,000 summerhouses and tourism facilities have been constructed in the last two years in Mu?la's Milas district, turning the city famous for its natural beauties into a concrete jungle.

More than 30,000 summerhouses and tourism facilities have been constructed in the last two years in Mu?la's Milas district, turning the city famous for its natural beauties into a concrete jungle.

Milas Mayor Mazlum A?an told the Do?an news agency that the district fell prey to the wrong tourism policies as well as to a boom in real estate sales to foreigners.

?Built on incentive policies, our coasts have turned into a concrete jungle. We do not want any other construction in the peninsula,? said A?an.

In recent years, many foreigners have settled or own summerhouses in the untouched and beautiful southern coastal cities of Turkey. Due to the construction of tourism facilities and the growing demand of local and international tourists for summerhouses, Turkey's coastal districts have started to turn into concrete jungles.

Chamber of Shipping Administrative Board Member Arif Y?lmaz pointed out that the future of the ?blue cruise? in the region was in danger. The non-governmental organizations, seamen and travel agencies in the region have reacted against the district ignoring problems, such as shanty settlements, water demand and summerhouses.

?Bodrum was a pearl at the crossroads of the Aegean and Mediterranean with a history of 3,500 years. Yet it has become a concrete jungle with 25,000 new constructions every year. The bureaucrats in Ankara have to consider the suggestions of the non-governmental organizations in Bodrum,? noted A?an.

?Instead of drawing on lessons, we tried to adopt the real estate sales model that Spain had left behind. Our tourism centers, Çe?me, Bodrum and Ku?adas? in the lead, have started to turn into a concrete jungle. Only Antalya has more five-star hotels than the sum of the whole of Spain. The Aegean coast has also been invaded by summerhouses.?

This news is a total 1630 time has been read