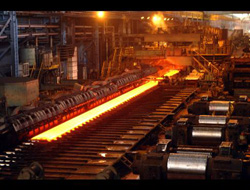 Steelmakers are scaling back production and two of the world's fastest- growing economies, Russia and China, are slowing

Shipping investors, analysts and brokers from New York to Oslo cut their forecasts for fourth-quarter rates by 17 percent in three days this week, according to data compiled by Bloomberg.

The cost to hire a capesize vessel, most commonly used to carry coal and iron ore, will average an estimated $70,000 a day in the period, down from $84,000 forecast at the start of the week.

The price to lease a capesize is falling the most in at least nine years, according to the benchmark Baltic Exchange index. Leasing costs may continue to decline because steelmakers are scaling back production and two of the world's fastest- growing economies, Russia and China, are slowing based on estimates from the International Monetary Fund and economists surveyed by Bloomberg. ArcelorMittal, the world's biggest steelmaker, said Sept. 17 it could cut output 15 percent in Europe and the U.S. to support prices.

``It will just keep going down from here,'' said London- based Andreas Vergottis, the research director at shipping hedge fund Tufton Oceanic Ltd. who correctly predicted the plunge a month ago. Prices won't ``find resistance'' until they've fallen about another 50 percent, he said Sept. 23.

Capesize rental rates tumbled 80 percent since reaching a record on June 5 of $233,988 a day on London's Baltic Exchange. The price fell 12 percent to $46,162 a day today, its biggest one-day decline since June 12. The broader Baltic Dry Index, a measure that also includes smaller ship sizes, fell the most in at least 23 years today.

China's steelmakers, which account for one in every three tons of the metal made globally, are at the center of the collapse. Mills that shut to curb pollution during the Olympics in Beijing haven't reopened, leaving the nation's stockpiles of iron ore, used to make steel and the single biggest commodity carried by capesizes, close to a record.

China imported 23 percent more iron ore in the first eight months from a year ago, according to customs data.

Traders who bet on a rebound in iron-ore demand after the Olympics underestimated the scale of the stockpiles by as much as a third, shipping investor Nobu Su, chief executive officer of Taipei-based TMT Co. Ltd., said in an interview Sept. 15.

Forward freight agreements for the fourth quarter declined as much as 42 percent since he spoke.

The IMF yesterday cut its forecast for Russian growth to 7.1 percent from 7.8 percent. China's economy will expand 10 percent this year, down from 11.9 percent last year, according to a survey of economists by Bloomberg.

Chinese steel production expanded 1.3 percent in August, the lowest rate in at least four years, according to the Brussels- based International Iron & Steel Institute.

Cia. Vale do Rio Doce, the world's largest iron-ore producer, has slowed shipments to China after steelmakers rejected a price increase, the China Iron and Steel Association said this month. Should that stand-off end, demand for capesize vessels will rebound.

Shipping Brazilian iron ore to China is the single biggest component of global demand for capesizes, based on distance multiplied by the amount of cargo, according to Simpson, Spence & Young Ltd., the world's second-largest shipbroker.

Chinese steelmakers ``have shown no interest'' in reopening plants because of ``languid'' demand from customers such as carmakers and builders, Bank of America Corp. analysts Michael Pak and James Lee said in a Sept. 22 report. Demand from China may also be hindered by National Day holidays that run for a week from Sept. 29.

The price of hot-rolled coil steel in southern China dropped 17 percent from a June peak, according to data from Metal Bulletin, a price and news service.

``It's going to be pretty tough unless the steel price recovers,'' said Omar Nokta, an analyst at Dahlman Rose & Co. in New York. Iron-ore demand is in ``disarray,'' he said.

Steelmakers in China account for half of global iron-ore imports, according to Simpson, Spence. Iron ore represents almost a third of all so-called dry-bulk cargo shipped, data from Drewry Shipping Consultants Ltd. show.

Lower rates will likely sap earnings for the 12 members of the Bloomberg Dry Ships Index, led by Seoul-based STX Pan Ocean Co., South Korea's largest bulk-shipping line. The index is down 53 percent from this year's peak in May.

The $14,000-a-day cut in the forecasts from the survey translates into about $400 million of earnings evaporating in the fourth quarter, based on half the global capesize fleet operating in the spot market.

``The steel industry has ended the period of high growth in production and demand,'' Baosteel Group Corp. Chairman Xu Lejiang said Sept. 18. ``Steel demand is not good, and we are facing falling orders from our customers.''

This news is a total 919 time has been read