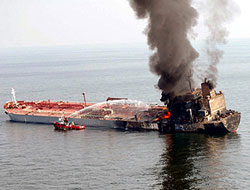 The 2005-built, 70,246 dwt product tanker Formosaproduct Brick, carrying a 58,000 tonne cargo of naphtha, caught fire after it collided with the 1998-built, 73,207 dwt panamax Ostende Max in the Malacca Strait on August 18, leaving nine crew members on the tanker dead.

While Malaysian authorities said investigations were ongoing remarkably little in the way of details of what led up to the accident have come to light.

Industry executives and representatives said they were in the dark as to the circumstances leading up to the collision, with no official statements having been released apart from the collision took place at around 2115 hrs on August 18.

The accident is understood to have taken place in the southbound deepwater lane of the Malacca Strait traffic separation scheme. The tanker was reported to bound from the United Arab Emirates for South Korea when the bulker collided with its bridge section.

There were no details of what led up to the collision.

Following the collision tanker is understood have been moved to just outside the traffic separation scheme while the blaze was tackled although it remains unclear if the burning vessel was towed or drifted.

Industry executives were surprised at the lack of information on what led up to the accident and said there was a need to know what happened in casualties.

Intertanko Asia representative Tim Wilkins stressed the need for information on the casualty so that the industry can learn from it.

?We need to understand what happened. Intertanko would like to see the official investigation report and root cause analysis so the industry can reap the benefits of the lessons learnt from such an incident,? he said.

The collision has prompted concerns over navigational safety in one of the world"s busiest waterways, despite the decline in casualties in the decade since the traffic separation scheme was introduced.

Malaysia Marine Department director general Ahmad Bin Othman said investigations into the incident were still ongoing. He said the investigations were expected to take another couple of weeks as the voyage data recorders and other information needed to be analysed.

Capt Ahmad would not comment on the likely causes of the accident.

While investigations are ongoing the 16 surviving crew of the Formosaproduct Brick are staying in a hotel in Port Dickson.

The 22 crew of the bulker Ostende Max are staying onboard the vessel which is anchored in Port Dickson. He said the vessel and its crew would be allowed to leave Malaysia once the investigations were completed.

The product tanker has yet to offload its remaining cargo of naphtha.

This news is a total 3334 time has been read