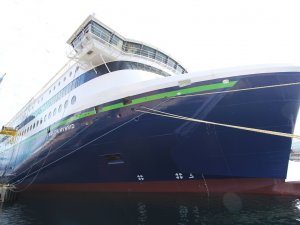 Color Hybrid came into being after its owner Color Line won the concession for the 10 am crossing from Sandefjord, Norway to Strömstad in Sweden – the reason to build this “fantastic vessel”.

Ulstein sales manager Rolf Petter Almli told Riviera Maritime Media’s Maritime Hybrid & Electric Conference that Sandefjord municipality requested an emissions-free ferry service on this route, with reduced noise an important issue. External noise at low speed (less than 13.5 knots while on battery power) in harbour had to be less than 50 Db, measured at 100 m from the vessel. While external noise at night in the harbour had to be less than 40 Db. Illustrating just how quiet this is, Mr Almli told the conference that a whisper is 30 Db, normal conversation 60 Db and a shout is 80 Db.

Ulstein won the contract to build the vessel and built the hull in Poland and the super structure in Lithuania. These were towed to the Norwegian shipyard in early November, where outfitting was carried out.

Explaining how the yard dealt with the challenge, he says “Having been a shipbuilder since 1917, Ulstein Verft has long experience in handling complex projects with many stakeholders involved, including those where time is limited.

“The process to construct a vessel is very complex, involving the precise co-ordination of thousands of individual tasks. Therefore, we focus on project management and efficient logistics. Our technical department can handle minor and major changes throughout the shipbuilding projects. Most of our engineers have a background in practical ship construction and know how to find workable and constructive solutions.”

Mr Almli explains “It is a compact shipyard and has all the facilities needed to build the vessel. The dock hall was too small for the vessel, but we added scaffolding covering outside [to accommodate the vessel]. Ulstein has built ships for over 100 years. It started with very small fishery vessels and has now builds very complex vessels like Color Hybrid.”

Color Hybrid has a battery pack of about 5 MWh, which provides for up to 60 minutes of manoeuvring and a speed of up to 12 knots. It also provides peak shaving, allowing the diesel engines to run at optimal load. In addition, it has an extremely good dynamic response to load variations. It eliminates or significantly reduces emissions (CO2, NOx, Sox and reduces particles).

Ulstein Fosen Design and Engineering manager Per Edvin Tande told the conference “I would like to emphasise the battery power notation [it was built to DNV GL’s notation], it is a fully certified battery power propulsion vessel despite being hybrid. The owner emphasised enhanced fire protection in the machinery space.”

He added that two battery packages are placed on each side of the switchboard which fulfils safe return to port requirements. There are four mechanical engines and on each is PTO PTI reduction gear.

Rolls-Royce provided the four B33:45L diesel engines. The Bergen B33:45 in-line diesel engine from Rolls-Royce was first introduced at SMM, Hamburg, in September 2014. Available with six, eight or nine cylinders, close to 60 engines have been sold to date.

The switchboard regulates rpm on PTO, adjusting to the most efficient operating mode for the propellers and adjusting the optimum consumption from the four generators. The shore connection is 7 MW so “quite good capacity”.

“This is a ground-breaking contract for Brunvoll,” said Brunvoll Volda chief executive Hallvard Pettersen at the time the contract was announced. “It is the first complete equipment package supplied by Brunvoll, Brunvoll Volda and Brunvoll Mar-El together. It is a great honour to be chosen as supplier to this vessel, which has also been awarded the ’Next Generation Ship’ prize at Nor-Shipping.”

The propulsion configuration is designed for a combination of diesel-mechanical, electric or battery operation modes. The rudder has been integrated with the propeller and hull to achieve optimum fuel efficiency.

Mr Tande comments that this is a “highly flexible plant that has several available modes”.

He adds “The owner requested diesel mechanical peak shaving and we have stabilised conditions for the main engines, which are operating between 20 to 25%, so using 60% battery capacity.

The Siemens’ battery system was produced in Trondheim, Norway. The water-cooled battery system weighs 65 tonnes, with maximum charging power into batteries of 7,000 kW. It is controlled by the energy management system, with a range of slow steaming for approximately 50 minutes. It is designed for a 10-year lifetime (2,600 kWh).

When it comes to charging, also provided by Siemens, the batteries are charged three times from shore at Sandefjord and twice by generator at Strömstrad.

The charging system has high voltage power of 11 kV and capacity of 7,000 kW. It is a starboard/portside solution.

The ship also has a large heating reservoir of 5 MWh capacity which uses waste heat from both the engine cooling water cycle and exhaust gases for heating on board. This, together with an optimal hull construction, helps to make the vessel energy efficient and environmentally friendly.

Mr Tande says “The high-voltage shore connection and heat reservoir on board mean the ferry is totally emissions-free when going to battery mode. We can store up to 10 MWh on the reservoir with a temperature of up to 90°. So, we are heating up the vessel by using energy from the heat reservoir and this reservoir is charged from the boiler system during transit mode.”

Moving to the interiors, the vessel will “set a new standard in comfort”. The onboard shopping and dining facilities are varied. The service offerings include large stores, and there are three cafes and restaurant options with a rich variety of food and drink.

The solutions for the vessel have been based on a green mindset, such as zero emissions for parts of the journey. There are several other implementations, small and large, which makes this a vessel that lives up to a green standard. One such installation is a greenhouse on deck, powered by reused waste heat, for onboard herb production.

A statement adds “Passengers who love a sea view will head for the aft bridge wing which has been carefully designed for passengers. A glass floor will enable passengers to join the rhythm of the waves with a direct view down to the sea.”