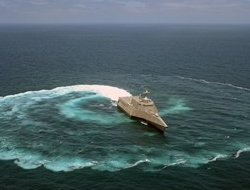 A recent report US Government Audit Office (GAO) report, mandated by the House, discussed amongst other issues.

(1) quality problems in constructing recently delivered ships and Navy actions to improve quality and (2) key practices employed by leading commercial ship buyers and shipbuilders to ensure quality and how these compared with Navy practices.

Excerpts from the report follow:  What GAO Found  The Navy has experienced significant quality problems with several ship classes over the past several years. It has focused on reducing the number of serious deficiencies at the time of delivery, and GAO's analysis shows that the number of deficiencies particularly "starred" deficiencies designated as the most serious for operational or safety reasons has generally dropped.   Nonetheless, the Navy continues to accept ships with large numbers of open deficiencies.

Accepting ships with large numbers of uncorrected deficiencies is a standard practice and GAO found that there are varying interpretations of Navy policy with regard to when the defects should be resolved.   In 2009, the Navy organization that oversees ship construction launched the Back to Basics initiative to improve Navy oversight of ship construction.

However, a key output of the initiative promoting consistent and adequate quality requirements in Navy contracts has yet to be implemented.  Although the environment in which leading commercial ship buyers and builders operate differs in many ways from the Navy's, some commercial practices aimed at helping to ensure that ships are delivered with a minimum number of deficiencies may be informative for the Navy.

Throughout the course of commercial shipbuilding projects, significant numbers of quality defects and instances of non-conforming work are identified. However, leading commercial ship buyers and shipbuilders make great efforts to ensure that these issues are resolved prior to delivery.

Moreover, leading commercial shipbuilders have strong quality management processes that track quality problems to the worker or supervisor level. Navy shipbuilding contractors have historically experienced difficulties in holding production workers and supervisors accountable for their work, but some of the shipyards reported they are making progress on increasing worker accountability.

What GAO Recommends  To improve the construction quality of ships delivered to the Navy, GAO is recommending, among other things, that the Navy clarify policy on when deficiencies should be addressed, provide guidance on contract quality requirements, and assess applicability of certain commercial practices to Navy shipbuilding.

This news is a total 1249 time has been read