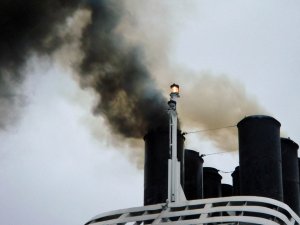 California regulators have given their blessing to a San Pedro company’s new method for reducing air pollution at ports throughout the state, but a legal dispute over patents involving another firm developing similar technology has yet to be resolved.

The two companies — Clean Air Engineering-Maritime and Advanced Cleanup Technologies Inc. — are attempting to profit off of California’s movement toward stricter air quality regulations at seaports by developing what are essentially gigantic filter systems that can remove toxins from vessels’ emissions.

Regulators anticipate that a method called shorepower, or “cold ironing” in maritime lingo, will be the most common method to reduce pollution. This involves vessel operators plugging in to land-based electrical systems while their ships are berthed, however in some cases it can require millions of dollars in upgrades to ships and infrastructure.

The ports of Los Angeles and Long Beach embraced the shore power concept even before the California Air Resources Board adopted stricter rules in 2007 meant to cut pollution at ports along the state’s coast. Indeed, the Los Angeles port says it was the world’s first port to adopt cold ironing for container ships in 2004, when China Shipping Container Line opened a terminal with the capability of letting ships plug in.

Despite local officials’ support for shore power, California regulators have left the door open for shippers to obey the rule by other means.

An alternative to shore power is what the two competing companies are seeking to provide.

CAEM thus far is the only one of those two firms that has won approval from the state Air Resources Board for its technology, called Maritime Emissions Treatment System, or METS.

Nick Tonsich, CAEM’s principal, is confident in being able to find buyers for its filter.

As currently designed, the METS system can be deployed on a barge that floats next to a vessel. The barge supports a crane that lifts a duct to where it can be connected the vessel’s exhaust system and capture emissions. The hot diesel exhaust flows through the duct to a filtration system that employes ceramic filters and ammonia to clean particulate matter and nitrous oxide from the otherwise dirty ship exhaust.

“They treat the exhaust of any engine,” said Rod Gravley, technology director for Tri-Mer Corp. of Owosso, Mich., which is a key supplier of filtration technology to CAEM.

METS’ development was in part financed by a $1.5 million grant the Port of Los Angeles awarded to the TraPac shipping terminal. CAEM also reports having a service agreement with TraPac to use the METS system at vessels that cannot plug into shore power when they call on the terminal’s facilities.

Tonsich said his company can build its METS system for some $6 million and sell it at a profit.

That cost is more than the $2 million he said a company may spend per ship to make upgrades for shorepower, which could be costly for multiple ships that do not always come to California.

“It’s not something that companies are doing to their entire fleets,” Tonsich said.

CAEM has reported the company will donate profits from its first generation system to local charities.

In October 2012, CAEM filed a federal lawsuit seeking a judgment stating that its technology did not infringe on the patents owned by ACTI, based in Carson.

ACTI then filed a countersuit in May of the following year alleging that infringement had occurred. A judge sided with CAEM this past March, allowing the company to move forward.

ACTI filed an appeal the following month that is still unresolved.

“At the end of the day, competition is actually good,” ACTI president Ruben Garcia said. “It’s good for the ports, as long as they’re not infringing on patents.”

Asked for a response on the lawsuit, Tonsich, who was previously affiliated with the other firm, said through a spokesman that CAEM has prevailed in litigation thus far and is still owed roughly $10,000 in fees from its competitor.

Aside from the legal dispute, Garcia said he anticipates the state Air Resources Board may approve its filtration system at some point in the next week or two.

Air Resources Board engineer Jonathan Foster said he could not comment on when officials may decide if ACTI’s system, called Alternative Maritime Emissions Control System, or AMECS, receives regulators’ approval, but did say it and the competing METS are the only technologies that have been considered by regulators as an alternative to shore power.

In Long Beach, the city’s Harbor Commission voted in February 2014 to spend about $2 million to finance testing for AMECS.

Heather Tomley, the director of environmental planning for Port of Long Beach, said the port’s support for AMECS testing is accompanied by its support for such measures as its program asking vessel operators to reduce speeds — and emissions — when cruising near berths.

Port leaders “are really trying to target the ships as they get closest to the communities,” Tomley said.

This news is a total 2001 time has been read
Tags: emission, method, reduce, regulation, turkishmatirime