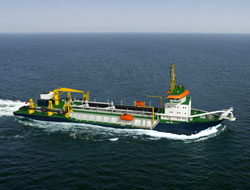 The two TSHDs for the Yangtze Estuary Waterway Administration Bureau are identical, each with a hopper capacity of 12,000m3. The first ship will be built at IHC Dredgers in Kinderdijk, with completion planned for the first six months of 2012. The second ship will be built under the supervision of International Dredgers Heusden (IDH) at a foreign construction site.

Completion is planned for early 2013. IHC Merwede established IDH early this year to build turnkey ships at suitable locations outside the company's own yards.

The three identical IHC Beaver 6522 cutter suction dredgers for India have been fitted out comprehensively, with anchor booms and an integrated spud carrier. The ships can dredge to a maximum dredging depth of 22m and each has a discharge pipeline with a diameter of 650mm. They will be built at IHC Beaver Dredgers in Sliedrecht, with completion planned for 2009.

The Adani Group is involved in harbour development and infrastructure projects throughout the world. Their fleet already includes a large number of IHC Beaver cutter suction dredgers and booster stations.

The five cutter suction dredgers for China will be built in collaboration with IHC Merwede"s partner, Dalian Liaonan Shipyard. They comprise three vessels of the IHC 7025MP type and two of the IHC 8527MP type, both of which were developed specially for China. IHC Merwede supplies components for these ships both from the Netherlands and from its own production facility in Ghangzhou.

The first ships will be completed in the second half of 2009. Since their introduction in 2004, and including this order, 22 vessels of the IHC 7025MP type have been sold. Thirteen have now been completed and have gone into operation successfully. The IHC 8527MP was launched in 2007 in response to the demand for larger vessels for the many major land reclamation projects in China. Including this order, 10 of the model have been sold to date.

These orders will bring in several man years of work, not only for IHC Merwede"s own companies but also for suppliers and sub-contractors.

This news is a total 4211 time has been read