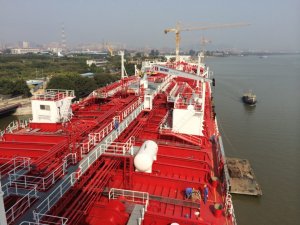 The amount is based on the cooperation between Stena Bulk and Concordia Maritime related to the IMOIIMAX concept.

The company explained that the payment is “a consequence of the commercial successes of the IMOIIMAX fleet since delivery.”

Expected to be made during the third quarter of 2019, the payment would be reported as other income.

“Developments during the second quarter were largely as we expected – namely, weak but still stronger than the corresponding quarter the previous year. Among the reasons were OPEC’s production cuts, extended seasonal maintenance of refineries prior to IMO 2020 and extensive deliveries of new vessels.”

During the first half of 2019, the tanker markets produced voyage result per day levels that exceeded the corresponding period in the slump year 2018 by 50-100 percent.

This news is a total 163 time has been read
Tags: Concordia Maritime, IMOIIMAX, Stena Bulk.