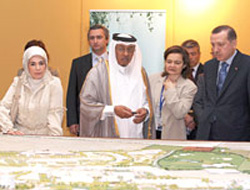 Speaking to reporters in Doha, Qatar, Prime Minister Recep Tayyip Erdo?an put on a brave face concerning the closure case, saying that he did not believe the AK Party would be shut down in the end.

Facing the threat of being shut down by the Constitutional Court, the ruling Justice and Development Party (AK Party) is about to finalize a strategy to prevent possible closure and is confident that the court will not rule to ban the party in the end, top government leaders said yesterday.

Speaking to reporters in Doha, Qatar, Prime Minister Recep Tayyip Erdo?an put on a brave face concerning the closure case, saying that he did not believe the AK Party would be shut down in the end. He said AK Party experts are now working on a road map and that he would receive a briefing on alternative strategies when he returns to Ankara.

Foreign Minister Ali Babacan said the government would decide soon on one of the two options -- whether to introduce a comprehensive constitutional reform or a "medium-sized package" that would, among other urgent reforms, rework constitutional criteria for closure of political parties.

"We are actually about to decide what to do with the Constitution. Should we go ahead with a wide range of constitutional reforms covering all aspects, or should we come up with a medium-sized package of amendments so that we deal with party closure conditions and also some other urgent issues, and then push forward that kind of medium-sized constitutional amendment package?" Babacan said in remarks published in the Financial Times yesterday.

The top state prosecutor at the Supreme Court of Appeals filed a closure case in March against the AK Party, saying it has become a "focal point for anti-secular activities." The AK Party denies the charges and says it is committed to secularism. The government already had plans for a constitutional overhaul but with the closure case underway, it is likely to speed up the process and pass at least some of the reforms that introduce European criteria for party closures.

Babacan said the government would decide in about two weeks on whether to go ahead with a constitutional overhaul or a medium-sized package consisting of reforms on party closure criteria and a number of other political reforms. The time element is a factor, he said, given the fact that Parliament is going into summer recess in two and a half months, adding: "It is not mandatory that we go to recess at the end of June.

Parliament can always decide to continue with the work. So, we are actually just in the middle of those discussions and studies."

Constitutional reforms to change the criteria for party closures are unlikely to receive support from the main opposition parties, namely the Republican People's Party (CHP) and the Nationalist Movement Party (MHP). The AK Party had said earlier it would take the changes to a referendum if necessary but appears to have abandoned the idea.

Erdo?an, in remarks broadcast on the Al Jazeera television, said yesterday the AK Party had no plan to take the planned constitutional changes to a public vote. It does not plan to establish a new political party that will take part in the next elections in case the AK Party is closed down, Erdo?an also stated.

Media reports have said the AK Party may consider including a proposal in the planned constitutional amendments stipulating that the changes will not apply to ongoing closure cases in order to win the opposition's support. There has been no confirmation of such reports.

It is not clear how long it will take the court to decide on the closure case against AK Party. Past cases differed from one to the next, and it may take a year or more.

Asked whether constitutional changes could be enacted between now and the Constitutional Court making its decision, Babacan said this was absolutely possible. New criteria for party closures will also make the court's job easier, he said. "If you take a political issue to the courts, then it will also make the job of the courts quite difficult, too. On what terms are they going to make their decision? I don't think it will be an easy decision for the Constitutional Court to make. That's why maybe with a constitutional amendment, we are thinking we could make their job easier."

Closure prospects unnerved Turkish financial markets and triggered a wave of severe criticism from the European Union, which Turkey aspires to join. EU officials went as far as to say a closure decision could disrupt Turkey's accession process, drawing ire from critics in Turkey that such statements amount to interference in Turkish domestic affairs.

At a press conference in London yesterday, Babacan echoed EU officials while responding to accusations of interference and said the EU cannot remain indifferent to developments in Turkey, a country negotiating for membership. He said the issue had come up in his talks with his British counterpart, David Miliband.

In an effort to address EU complaints of slowdown in membership reforms, the government has introduced amendments to an infamous article of the Turkish Penal Code (TCK), Article 301.

Babacan, who said fresh revisions to the law could be adopted as early as next week, argued that the challenge was to change the attitudes of an elite that could find "other laws to give people a hard time." "We still have the same police...the same judges. We have to go through this mental transformation... people have to adopt a new way of thinking," he told the Financial Times. "It does not happen overnight."

"There is now a shift of power from certain circles to the people," he added, in a coded reference to the arch-secularist elite that have resented the rise of the AK Party since it came to power in 2002. "Some circles will lose their privileges. It is a painful transformation we are going through and it is not easy."

But Babacan said the government was determined, whatever the obstacles thrown in its path at home or in a few hostile EU capitals, to adopt the acquis communautaire -- the body of EU laws would-be members must embrace. "We will not lose anything...it will help raise the quality of life in Turkey," he said.