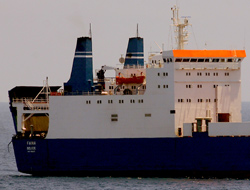 A SPOKESMAN for the Somali pirate gang who have hijacked the Ukrainian-owned, Belize-flag cargo ro-ro vessel Faina has denied the pirates have fought among themselves with three being shot dead.

A SPOKESMAN for the Somali pirate gang who have hijacked the Ukrainian-owned, Belize-flag cargo ro-ro vessel Faina has denied the pirates have fought among themselves with three being shot dead.

The report that a ?mutiny? had broken out among the pirates came from Kenyan sources but has not been confirmed. The US Navy which has a destroyer stationed close to the Faina, now anchored off the Somali coast, has said it has no knowledge of a firefight on board.

Meanwhile InterManager, the International Ship Managers" Association which represents a worldwide fleet of more than 2,500 oceangoing ships and some 100,000 crew, has joined in the general shipping industry condemnation of ?the lack of a co-ordinated international effort to tackle the escalating piracy problem in the Gulf of Aden.

With more than 200 seafarers now being held hostage off the coast of Somalia, some of whom are associated with its members, InterManager says it is calling for a targeted military response to protect crews and ships operating in the region. It is also issuing its members with advice to help them support their ships which are obliged to sail the perilous Gulf of Aden and along the East African coastline.

InterManager general secretary Guy Morel said: ?It is unacceptable that our crews are obliged to face this kind of danger while their ships are carrying essential goods, including food and commodities, to all the world"s people.?

Calling for an increased, high-profile military presence in the region to protect shipping traffic, Mr Morel said: ?What we need now is some meaningful action which will protect our mariners and act as a deterrent to the pirates. It is no good saying ships should protect themselves. Historically the military has always protected merchant vessels during times of conflict. Now is the time for them to do much of the same ? whether that be in the form of increased patrols or protected convoys. We cannot allow this situation, which gets worse by the week, to continue while our crews and their families suffer.

He added: ?It is unclear why more swift action has not already been taken when the UN has obtained from the Somalian Government the right to pursue pirates in its territorial waters.?

This news is a total 3155 time has been read