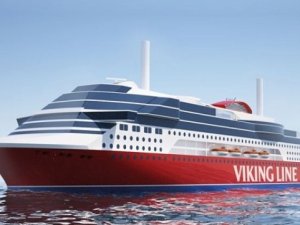 Construction of Viking Line’s new cruise ship started on Monday at the Xiamen Shipbuilding in China.

The new LNG-fueled vessel is larger than M/S Viking Grace, the first LNG-powered large passenger ship in the world, and is expected to be among the most energy efficient ships in the world. The Viking Grace was the first passenger ship in the world to be equipped with a rotor sail developed by Norsepower, but the line is yet to announce if the new ship will also be fitted with the system. On Viking Grace, is expected to reduce emissions by up to 900 tons annually sailing between Turku in Finland and Stockholm in Sweden.

The vessel will be launched for operation in early 2021 on the Turku–Åland–Stockholm route and is designed with a focus on providing open and unobstructed views of the archipelago. An architectural company based in Sweden, Koncept Stockholm is responsible for the interior design of the new vessel. Other suppliers include Wärtsilä, ABB Marine, Kone, Deltamarin and Almaco.

This year, Viking Line is operating seven vessels. It hosted 951,010 passengers on its routes in July after starting six-hour day cruises from Helsinki on board M/S Mariella and M/S Gabriella in June. Last year, volume surpassed the one-million passenger mark thanks to additional capacity in the form of the catamaran Viking FSTR which served the Helsinki–Tallinn route. The increase for July this year is over four percent compared with last year, excluding Viking FSTR.

This news is a total 774 time has been read
Tags: Construction Starts on Viking Line’s New Passenger Ship