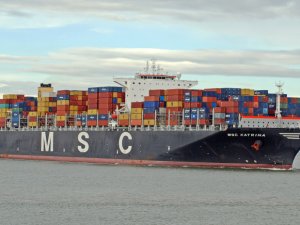 The crew of the 12,400 TEU container ship MSC Katrina reported that one of the containers on board caught fire on Friday, November 20, while the vessel was en route from Antwerp to Hamburg, according to Germany’s Central Command for Maritime Emergencies.

The crew of the Panama-flagged boxship reported the incident to the Vessel Traffic Service Cuxhaven on Friday morning, while the 2012-built vessel was in the North Sea, off the island of Helgoland.

The smoke and fire was coming from a container laden with charcoal. The container was flooded with water to lower the temperature.

Firefighting crews from Cuxhaven and Bremerhaven  boarded the vessel on Friday afternoon and helped the crew to extinguish the fire.

The MSC Katrina then proceeded to Hamburg, where it docked at 11:30 pm the same day. The damaged container and some of the surrounding containers were unloaded as a precaution.

There have been no further damage to either the ship or the cargo, and nobody was injured in this incident.

This news is a total 4383 time has been read
Tags: CCME, fire, Germany, MSC Katrina, the North Sea.