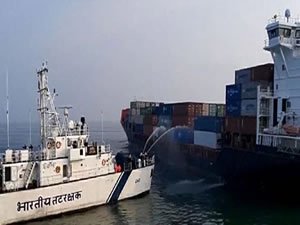 For the second time in a month, the Indian Coast Guard has been called upon to assist in fighting a fire aboard a commercial ship at sea.

They are currently assisting with a container fire aboard a vessel operating regional service.

According to the Indian Coast Guard, they received a call for assistance from the 10,600 DWT vessel X-Press Godavari which was in an anchorage near the Indian city of Haldia in the state of West Bengal.

There are reported to be 15 crew members on board and the ship was transporting 506 containers.

Three ships from the Indian Coast Guard, the Varad, Amogh, Amrit Kaur, were dispatched in response to the call for assistance, and a Dornier aircraft was also deployed.

The Indian Coast Guard releases pictures of their ships putting water on to the containers.

The vessel’s last reported port of call was Port Kelang, Malaysia and she is scheduled to proceed to Kolkatta in India.

During the summer, the vessel was introduced on to a new regional route that continues to Chattogram, Bangladesh as an upgrade in service for Indo-Bangladesh trade.

This current fire renews focus on the dangers of cargo fires at sea. In July, the National Cargo Bureau, which conducts inspections in the U.S called for urgent reform citing the dangers from undeclared or misdeclared dangerous cargos as well as poor stowage.

According to the Bureau, its inspection initiatives revealed an alarming number of containers included misdeclared dangerous cargoes that represent a serious safety risk. On average, they reported a containership suffers a major fire every 60 days.

The National Cargo Bureau cited nine major containership fires in 2019, but suggested that the frequency of incidents is increasing.

Just two weeks ago, the shipping industry announced a new collaboration designed to call more attention to the persistent issues around the poor packing of cargoes.

The collaboration, which is known as the Cargo Integrity Group, said it was dedicated to improving the safety, security, and environmental performance throughout the logistics supply chain.

Just a few days ago it was announced that the burnout tanker would be towed into an Indian port to offload in crude oil cargo.

This news is a total 3298 time has been read