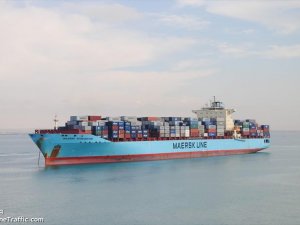 A fire has been reported in a below-deck container on board the U.S.-flag containership Maersk Kensington in the eastern Gulf of Aden, the second such incident to hit a Maersk Line vessel in recent weeks.

All crew are safe and the fire is contained, Maersk Line has confirmed.

On Thursday, 16 March 2018 at 20:50 EST, the crew of the Maersk Kensington reported a container fire in a cargo while en route from Salalah, Oman towards Suez, according to Maersk. All 26 crew members are safe and accounted for and the fire is reported to be contained.

“Safety measures were taken immediately. The crew reacted swiftly and as per procedure, by release of CO2 into the cargo hold to contain the fire,” Maersk Line said in a statement on the incident.

The incident is the second cargo fire on board a Maersk containership in as many weeks.

On March 6, Maersk Line’s 2017-built Maersk Honam suffered a devastating fire in its forward cargo holds while heading west in the Arabian Sea approximately 900 nautical southeast of Salalah, Oman. Tragically, five crew members lost their lives in the incident. The response to that incident is still on-going in the Arabian Sea.

The Maersk Honam, an ultra-large containership, is carrying a total of 7,860 containers, corresponding to 12,416 TEU (twenty-foot equivalent).

MLL, in coordination with Maersk Line, will investigate the matter thoroughly in cooperation with all relevant authorities, Maersk Line said.

Maersk Kensington is currently at anchor outside the port of Salalah, and is getting assistance from shore. The vessel is carrying 3518 containers (corresponding to 5616 TEU). In case of cargo delays all impacted customers will be contacted directly.

Maersk Kensington was built in 2007 and has a nominal capacity of 6188 TEU (twenty-foot equivalent unit). It sails under U.S. flag.

In late February, another Maersk vessel, the Maersk Shanghai, lost 76 containers overboard during heavy weather off the U.S. East Coast. One of the containers lost at sea was reportedly carrying about 5,900 pounds of sulfuric acid.

This news is a total 1016 time has been read
Tags: Container Fire Reported On U.S.-Flagged Maersk Kensington in Gulf of Aden