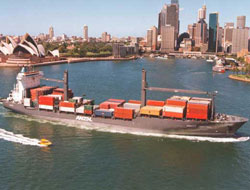 The CEO of the Port of Ashdod Company, reported an increase in TEU terms.

The CEO of the Port of Ashdod Company, reported an increase in TEU terms.

Shuki Sagis, the CEO of the Port of Ashdod Company, reported an increase in TEU terms of 3% in the total volume of containers during the eleven months period, January ? November 2008, as compared with parallel period in 2007. In the first 11 months the port handled TEU 754,076 compared to TEU 746,446 in the parallel period, an increase of 1%. Sagis noted that despite the general decline in economic activity the port has been stable and successful in solving many obstacles in the operational chain, enabling a continuous and more efficient work from the operational aspect.

This news is a total 1298 time has been read