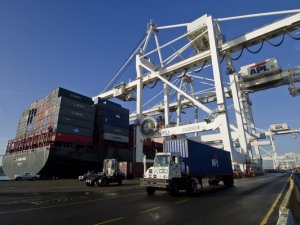 Containership reliability was broadly unchanged in November as the average on-time performance across all trades slipped by just 0.8 percentage points against October to 77.2%, according to Carrier Performance Insight.

Six of the 10 trades covered recorded month-on-month on-time improvements in November, but worse performances in each of the three East-West trades and in the Asia-South America route – the only North-South trade to decline – dragged down the overall reliability performance. The average deviation from the sailing schedule was 0.8 days.

“Reliability seems to have found a new and improved standard with the on-time performance settling in the 70-80% range in each of the last seven months, about 10-15 points better than the previous long-term average. Drewry believes that this new normal will last but that is probably close to the ceiling of what shippers can expect from carriers in the short-to-medium term as most of their attention will go on restoring profitability,” said Simon Heaney, senior manager of supply chain research at Drewry.

“The weaker financial environment probably won’t have much, if any, impact as during the industry’s nadir in 2009 on-time reliability actually improved by around 7 points to average 60% so there is little reason to expect any worsening in performance this time,” added Heaney.

Building on Drewry’s long established schedule reliability benchmarking that started back in 2005; the new Carrier Performance Insight provides the ability to benchmark the reliability performance of container carriers on a port-to-port, trade lane, service and industry-wide basis. This information is available via a user-friendly website powered by data from global shipment management software solutions provider CargoSmart.

This news is a total 4572 time has been read