Container terminal to be built 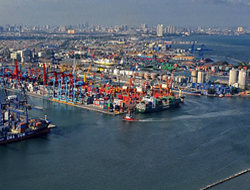 Due to shipper complaints about the length of time and cost of getting Indonesian goods to and from its home market, a new container terminal complex is being built near Jakarta which could transform the countrys economy.

During the past five years, trade between Indonesia and the rest of Asia has mushroomed, particularly when compared to trade with North America and Europe (see Figures 1 and 2). How much of this is due to proximity, or Indonesian goods being re-labelled by another Asian country, is beyond the scope of this analysis, but the lack of deep-sea services to the main consumer markets of Europe and North America must play a part. 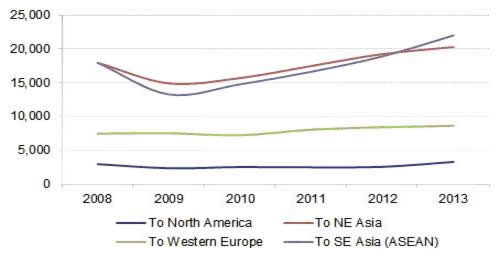 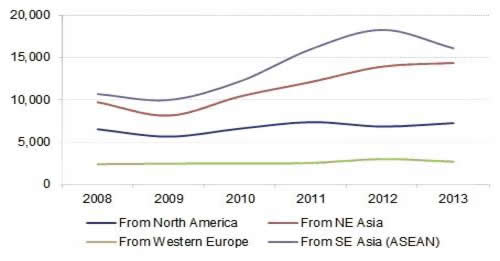 Although Indonesia is the world’s fourth most populous nation and South East Asia’s largest economy, ocean carriers currently offer no direct mainline services to either Europe or the US due to port capacity shortages. As a result, shippers pay a premium in time and cost to access long-haul international services via feeders at Asian transhipment hubs such as Port Klang, Tanjung Pelepas, and Singapore. They also complain of rolled cargo, missed connections and unreliable but expensive all-in packages from 3PLs which then offer little recompense when the shipping leg goes awry.

Back in 2011, a study by APM Terminals found that five out of the six major Indonesian container ports, which combined handle some 90% of Indonesian container traffic, were operating above capacity. APMT advised that investment was urgent, with at least 6-7m teu of capacity needed by 2015 and an additional 15m teu in place by 2020. Yet since this stark warning, progress in adding capacity has been glacial.

In part this is due to the plodding progress of port reform and liberalization which, as in other countries, has seen tenders for new projects collapse on more than one occasion, despite international port operators’ eagerness to invest in a market that they believe has huge potential. In the meantime, the container handling capacity crunch across the archipelago has worsened, increasing the logistics burden on Indonesian businesses.

Indonesia’s major ports still suffer from shallow drafts and, while the country’s economy has been growing rapidly for much of the past decade, container port investment has been sparse. Inefficiencies and delays are the inevitable result.

The challenges, but also the hope of an improved future, are most apparent at the port of Tanjung Priok, the main gateway to Java located north of Jakarta – by some distance the country’s largest box port as well as the national hub for most of the domestic services that link its 1700+ islands.

Last year Tanjung Priok handled approximately 6.4 million teu, up from 6.21 m teu in 2012, which must be close to its rated capacity (see Figure 3). 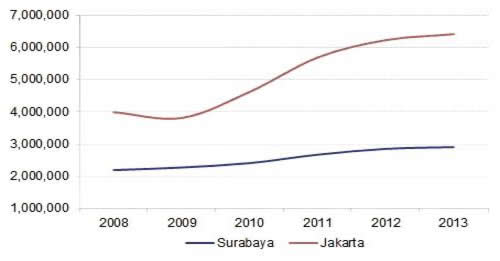 Landside and vessel delays are common due to the chronic lack of investment. Not only is capacity scarce, but the port’s existing terminals are also shackled by a general max vessel length of 250m and a maximum draft within the container terminal area of 11.5m. Hutchison Port Holdings, one of the few international port concerns with a major investment in Indonesia, operates Jakarta International Container Terminal. Its maximum listed draft at Terminal 1 is listed as 11-14m, and just 8.6m at Terminal II, which is insufficient for ULCVs. HPH reports that it’s terminal handled 3.3m teu in 2013, and, according to Drewry’s rough estimates, its maximum capacity is probably around 4m teu.

Carriers say the biggest vessel they would consider berthing in Tanjung Priok is only around 5,000 teu, suitable for longer-haul intra-Asia services to North Asia, or to Australia, but nowhere near big enough for the major East-West trades to Europe or the US. This means transhipment, adding time, risk and cost into supply chains.

For example, Maersk Line offers estimated transit times to Felixstowe from Jakarta of 23 days after transhipping at Tanjung Pelepas, compared to 18 days from Tanjung Pelepas direct to the UK. Evergreen Line’s various services from Jakarta to Rotterdam take from 23 to 35 days, while CMA CGM offers feeder services via Port Klang’s Westport Terminal into Hamburg with transits of 25-26 days, compared to transits of 20-22 days from Port Klang to Hamburg direct. And this assumes that transhipment connections are always made on time, which is not always the case. Miss one, and another seven days can easily be added to the transit times of transhipment services.

The negative impact of transhipment on freight rates is reflected in Figure 4, although other competitive factors sometimes come into play. 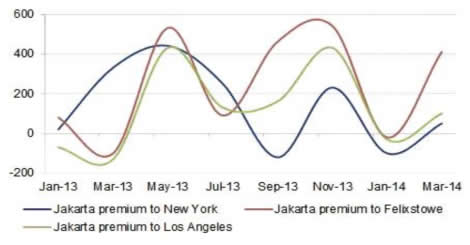 Removing the premium imposed on Indonesia’s container shippers will take some time, but adding more port capacity and encouraging carriers to offer direct mainline services is the first step. Optimists are focussed on a new port under construction near to Tanjung Priok.
The first of three new container terminals is due to be opened in the middle of next year at Kalibaru Port, also sometimes called New Priok. Pelindo II, the state-owned operator of both Kalibaru and Tanjung Priok, has set up a joint venture with Mitsui to develop the first terminal, which Mitsui will build and operate.

Pelindo II estimates the building cost of the terminal at just under $400m. Annual capacity will be around 1.5m teu, while two additional terminals will be built by 2018 adding a further 4.5m teu.

The Indonesian Logistics Association estimates that Indonesia’s logistical costs currently consume about 25 and 30 percent of annual GDP, far higher than comparative figures for Singapore and Malaysia. Pelindo II believes the three new Kalibaru terminals can vastly reduce this drain on the economy.

Critically, the new terminals are due to offer more draft than facilities at Tanjung Priok, with depth alongside berths expected to be about 16 metres, similar to that available at Singapore. This will give container lines the option of adding Jakarta to mainline strings deploying ULCVs, cutting transit times for shippers and reducing the burden of the logistics costs on the economy. It won’t happen overnight, however, as the port is not conveniently located just off the beaten track.

This news is a total 7328 time has been read