Container Volumes Continue to Slide at the Port of Long Beach 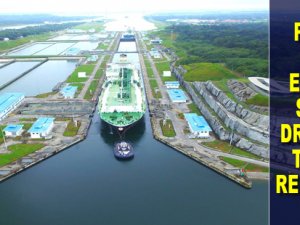 Fewer cargo containers moved through the Port of Long Beach in April as economic effects of the COVID-19 pandemic continue to impact global trade.

The Port of Long Beach is the nation’s second busiest port behind the neighboring Port of Los Angeles, which last week reported it handled 15.5% fewer containers in the first four months of this year compared to the same period last year.

“We look forward to a recovery stage and rebounding cargo shipments as the nation contemplates relaxing shelter-in-place orders, people return to work and consumer demand rises – however it will not be in the short term,” said Mario Cordero, Executive Director of the Port of Long Beach. “In the meantime, we continue to collaborate with importers, exporters, terminal operators and labor to develop a recovery plan while ensuring the safe and reliable delivery of goods moving through the Port of Long Beach.”

While manufacturing in China appears to be rebounding from the COVID-19 pandemic, demand in the United States continues to be below normal due to the pandemic.

The Port of Long Beach said that while it had only one canceled sailing in April, there are more to come. The San Pedro Bay port complex is expected to have 48 canceled vessel voyages between April 1 through June 30, including 16 that are scheduled for the Port of Long Beach. The two ports – Long Beach and Los Angeles – reported 10 blank sailings during the same period in 2019.

The figures come on the heels of 61 canceled sailings for the San Pedro Bay ports during the first quarter of 2020 caused by a manufacturing slowdown during the height of the COVID-19 crisis in China, nearly double from 31 blank sailings a year earlier, the Port of Long Beach said.

This news is a total 270 time has been read
Tags: port of long beach Cape Town Takes Steps to Ease Congestion as CMA CGM Imposes SurchargesTransnet Port Terminals announced that it is taking immediate steps to designed to address the Port of Cape Town’s operational backlogs and congestion resulting, it says, from the coronavirus impact on operations. Livestock Carrier Ensnared in Legal Battle in South AfricaThe livestock carrier Al Messilah has been delayed at the port of East London, South Africa due to a legal dispute over whether she may load a cargo of South African sheep. South Carolina To Open First New U.S. Container Terminal in 11 YearsThe South Carolina Ports Authority adopted its fiscal year 2021 budget including significant investments to continue the growth in the ports. Among the projects is the opening of the first new container terminal in the US in 11 years. Prince Rupert Port Creates Unique Crew R&R OpportunityThe Prince Rupert Port Authority (PRPA) in Canada came up with one of the more creative ways to both show its gratitude to seafarers while also providing crew members some much needed time to relax.