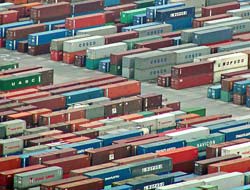 In ten years, the volume of containers that were handled by the ports in the country has increased by 431%.

In ten years, the volume of containers that were handled by the ports in the country has increased by 431%.

"This growth is spearheaded by Port Klang and Port of Tanjung Pelepas (PTP), the two leading container ports in the country," he said.

Chan's opening speech was read out by Deputy Transport Minister Datuk Douglas Uggah Embas, who later launched the fifth instalment of the Asean Ports and Shipping Conference and Exhibition here.

In his speech, Chan added that he expected the world containerised trade to continue growing faster than the world economy.

"The growth of the world economy over the last decade was around 3-4% annually, while the global containers handled by ports has increased from 100 million TEUs in 1991 to around 350 million TEUs in 2004," he said.

This news is a total 2081 time has been read