Containership captain dies in Cartagena after violent incident on board 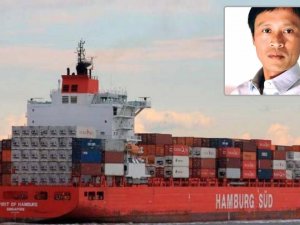 The master of the container vessel Spirit of Hamburg was found dead on board the ship on April 16, 2020 while the vessel was in the Port of Cartagena, Colombia, local authorities informed.

The ship’s manager Zeaborn Ship Management confirmed that a seafarer died on board the containership after succumbing to fatal injuries suffered in a violent confrontation with an intruder.

The 3, 630 TEU ship is flagged by the Isle of Man ship registry owned by Maersk’s Hamburg Sud brand from Germany.

The Colombian Ministry of Defense and the General Maritime Directorate said that the crew member was actually the ship’s captain, a national of Burma (Myanmar):

As informed, the Sprit of Hamburg arrived in Cartagena in the early morning of April 16 with 21 crew members on board in order to load and unload containers at the port facilities of the Cartagena Regional Port Society.

“At approximately 5:00 pm the same day, when the vessel was still in the dock, a report was received from the Protection Officer of the Cartagena Regional Port Society about the death of the captain, who was found on the main deck of the ship,” the ministry said.

The Colombian authorities have launched an investigation into the incident in line with its competence of a flag state.

“The exact circumstances of the violent incident are yet unknown and police have started an official investigation into the events and conducted interviews with the crew of Spirit of Hamburg,” Zeaborn Ship Management said in a statement.

” In order to not interfere with the investigation of the local police Zeaborn Ship Management will refrain from making any further statements at this stage.”

The statement is being issued after conflicting media reports emerged in the media alleging that the ship’s captain was killed in a mutiny on board the ship.

The company added that the authorities in Colombia have meanwhile granted permission for the vessel to move from berth to inner anchorage.

“The next of kin of the crew member have been notified and will be offered full support in this very difficult time. The crew of Spirit of Hamburg will be receiving psychological help following the tragic death of their colleague,” the statement further reads.

Zeaborn Ship Management added that three senior officers are one month beyond their contractual relief date, but they are showing great professionalism in making the best of the current relief/repatriation restrictions. All other crew members are due for relief between now and October.

This news is a total 654 time has been read
Tags: MV Spirit of Hamburg