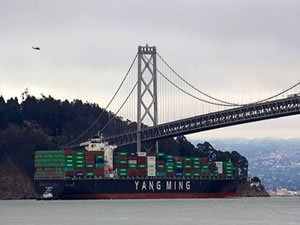 A containership that arrived in the Port of New York and New Jersey and docked at a terminal in Bayonne, New Jersey is reportedly leaking oil into the harbor.

A response team is managing the situation. According to the US Coast Guard, it was contacted by the National Response Center after an oil sheen was seen near the container ship YM Mandate and the vessel activated its approved response plan.

The 6572 TEU containership had arrived at the New Jersey terminal from Halifax and was due to sail for Savannah, Georgia on her normal route. She is currently docked at Global Container Terminal.

A Coast Guard Maritime Safety and Security Team in the area reported a small crack in the ship’s hull which was leaking fuel oil.

According to the Coast Guard, the affected tank has a capacity of 462,297 gallons.

A unified command consisting of the Coast Guard, New Jersey Department of Environmental Protection, and Gallagher Marine Systems, is responding.

Oil containment boom and absorbent pads have been deployed around the YM Mandate. In addition, contracted skimming vessels have been working to remove oil from the water.

The Coast Guard reports that all of the leaking product is currently contained within the boom and skimmer system.

Internal transfer of fuel oil from the affected tank is also being conducted.

This news is a total 2965 time has been read
Tags: Containership leaking fuel oil at New Jersey terminal