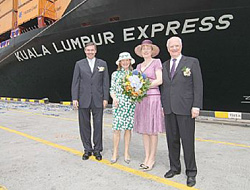 A first for Hapag Lloyd as KUALA LUMPUR EXPRESS is named...

A first for Hapag Lloyd as KUALA LUMPUR EXPRESS is named...

On 30th April the long-established Hamburg shipping line Hapag-Lloyd named a containership in Malaysia for the first time.

The patron of the 336m long KUALA LUMPUR EXPRESS is Ursula Adrion, wife of Adolf Adrion, member of the executive board of Hapag-Lloyd AG.

The KUALA LUMPUR EXPRESS can carry 8,749 TEU and is the second ultra-modern training ship on which Hapag-Lloyd trains its nautical and technical personnel, following the identical ?Chicago Express?, which entered service in February 2006. Both mega containerships are among the largest vessels of their type worldwide.

In addition to her crew of 24, the KUALA LUMPUR EXPRESS carries 15 upcoming seafarers and two trainers on board. The heart of the additionally installed training deck is a multimedia training room. A training workshop is also provided in the engine room. This year, another six groups will start their education on board of both training ships, including young apprentices as officers assistants, ship mechanic trainees and future engineers on watch.

Hapag-Lloyd is thus underlining its traditionally strong commitment in the training area. In recent years, the company has continuously increased the number of training places it has offered. A total of 56 young persons began their training in the marine area at Hapag-Lloyd in 2007, and the figure will be up to 75 this year. In the past ten years, Hapag-Lloyd has given close on 300 young persons training opportunities on board. The total number including traineeships on land (commercial and industrial occupations) is more than 560.

?Our sector has a huge need for young technical and nautical staff, and, given the optimistic growth forecasts, this requirement will tend to increase in the next few years,? commented Hapag-Lloyd executive board member Adolf Adrion. ?Containershipping offers young persons a very interesting working environment with excellent career prospects and a secure future.?

According to the international economic research institute Global Insight, container transport volume worldwide will surge to 158m standard containers (TEU) by 2012, corresponding to annual average growth of 6.8%. An overall 114m TEU were shipped worldwide in 2007. ?We are consistently expanding our fleet. We will be taking delivery of an additional 14 newbuildings up to the end of 2011,? stated Michael Behrendt, CEO of Hapag-Lloyd AG.

Hapag-Lloyd cargo ships have regularly served Malaysia since 1872. Today, Hapag-Lloyd"s customers in Malaysia are offered 25 weekly departures to ports all over the world. Hapag-Lloyd has also been represented for more than ten years with its own branches in Kuala Lumpur, Port Klang and Penang.

Hapag-Lloyd is one of the world"s five largest container shipping lines. The company, founded in Hamburg in 1847, is represented with more than 340 sales offices in over 100 countries and has approx. 8,400 employees. In the 2007 financial year, Hapag-Lloyd transported approx. 5.5m standard containers (TEU) worldwide and achieved sales of over ?6 billion. 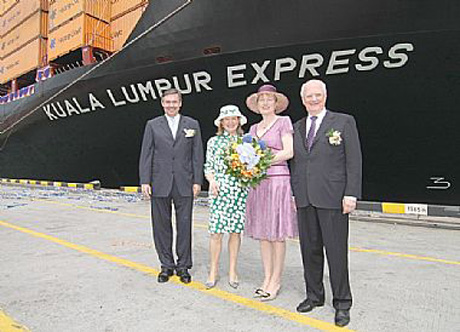 This news is a total 810 time has been read