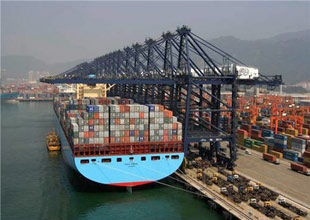 THE European shortsea carrier Containerships has chosen North East based Teesport, owned by PD Ports, as its strategic freight hub for Northern Europe.

THE European shortsea carrier Containerships has chosen North East based Teesport, owned by PD Ports, as its strategic freight hub for Northern Europe. The shipping line, which acquired Mediterranean short-sea specialist Contaz in March, will use Teesport, the UK"s third largest port by volume, to link its new Mediterranean services with its traditional Baltic routes.

Initially there will be two ships on this route, operating a 12/13 day frequency, meaning that Containerships will be making five calls a week in total at Teesport. Teesport and Containerships plan to increase the frequency along the new route to reach a targeted increase of 20,000 TEU . This will bring the total volume fed by Containerships through Teesport to almost 80,000 TEU a year.

David Robinson, Chief Executive Officer of PD Ports, explains the route: "We will offer unique shortsea door to door connections between Bulgaria, Greece, Italy, Libya, Turkey, and Tunisia in the South linking via the UK, with the Baltic States, Finland, Poland, Russia and Scandinavia in the North. The two services also offer possibilities for transport to and from Belarus, Ukraine and Central Asia."

This news is a total 3999 time has been read