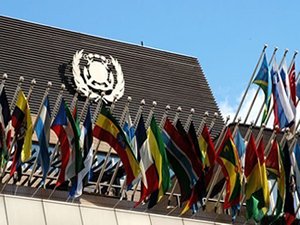 Topping the debate will be the short term measures to cut shipping’s carbon footprint. At last month’s intersessional a plan was agreed upon to reduce the carbon intensity of shipping by 40% compared with 2008 levels in the next 10 years.

This week’s delayed 75th gathering of the Marine Environment Protection Committee (MEPC) – to be held virtually by the International Maritime Organization (IMO) – features a packed agenda, and will likely deliver most of the points agreed upon at last month’s last week’s Intersessional Working Group on Reducing Greenhouse Gas Emissions from Ships despite vocal opposition from some nations and a host of NGOs.

Topping the debate will be the short term measures to cut shipping’s carbon footprint. At last month’s intersessional a plan was agreed upon to reduce the carbon intensity of shipping by 40% compared with 2008 levels in the next 10 years.

The proposed amendments to the MARPOL convention would require ships to combine a technical and an operational approach to reduce their carbon intensity.

“This proposal will not cap, let alone reduce, the shipping sector’s 1 billion tonnes and rising of annual emissions this decade – the very decade in which the world’s climate scientists say we must almost halve global greenhouse gas (GHG) emissions to stay within a relatively safe 1.5°C of global warming, as committed to under the Paris Agreement.”

The intersessional text violates the initial IMO GHG Strategy in three ways, the NGOs claim, suggesting it will fail to reduce emissions before 2023, will not peak emissions as soon as possible, and will not set shipping CO2 emissions on a pathway consistent with the Paris Agreement goals. Splash understands that there are six non-European countries considering rejecting the text, and are looking to get some European nations to support them.

Albon Ishoda, the Marshall Islands ambassador to Fiji, who will be following this week’s MEPC talks closely, commented over the weekend:

“We as the Republic of the Marshall Islands will call to reject the short-term measure proposal up for adoption next week in the MEPC as it fails to reduce emissions before 2023, it will not peak emissions as soon as possible, and it will not set ship CO2 emissions on a pathway consistent with the Paris Agreement 1.5C goal. We call on all countries who signed the Tony de Brum Declaration to reject this proposal as a measure incapable of achieving our long-term climate goals in the IMO.”

De Brum was a Marshallese statesman, in whose name 40+ countries, including most European countries, signed up to urgent short-term action to cut shipping emissions three years ago. De Brum passed away in 2017.

Despite the opposition, if previous MEPCs are a guide, what was agreed upon last month at the intersessional will likely pass this week.

“The dual approach aims to address both technical (how the ship is retrofitted and equipped) and operational measures (how the ship operates),” the IMO explained in a release last month.

The CII rating would be given on a scale – operational carbon intensity rating A, B, C, D or E. These energy ratings of every ship above 5,000 gt will be made fully public and updated on an annual basis, possibly within a matter of months.

Shipping’s top lobby groups, meanwhile, have coalesced their messaging ahead of this week’s crunch environmental talks.

Eight of the largest global shipping associations including BIMCO, INTERCARGO, INTERTANKO, the World Shipping Council and the International Chamber of Shipping joined forces to urge governments to support an industry-financed, $5bn research and development decarbonisation programme.

The shipping associations have proposed the $5bn R&D programme, to be overseen by IMO and financed through a required R&D contribution of $2 per tonne of marine fuel consumed.

The R&D programme, first mooted 11 months ago, would be managed through a non-governmental research and development organisation – an International Maritime Research and Development Board (IMRB).

As such, shipping lobby groups are trying to lead the carbon tax argument although the $2 per tonne levy will face plenty of criticism with many NGOs and shippers suggesting the figure ought to be far higher.

“The IMO 2050 climate targets can only be achieved with the immediate acceleration of zero-carbon fuels and technologies, and the IMRB is a crucial vehicle for driving the progress needed to build a zero-carbon shipping industry,” the lobby groups said in a joint release.