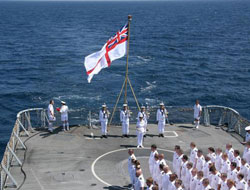 The United Kingdom Warlike Operations Area Committee (WOAC) has agreed that the ?high risk? zone agreement in respect of the Gulf of Aden should continue in force.

The United Kingdom Warlike Operations Area Committee (WOAC) has agreed that the ?high risk? zone agreement in respect of the Gulf of Aden should continue in force.

WOAC first agreed to issue a recommendation designating the Gulf of Aden between 45°E and 53°E and north of a straight line connecting Cape Guardafui and the western tip of the Island of Socotra a ?high risk? zone on 28 October 2008 due to the activities of pirates operating from Somalia.

The recommendation is that all ships transiting the high risk zone should remain within the Maritime Security Patrol Area defined by the Commander of CTF150. Operators of ships not remaining within that area (other than for reasons purely related to safety of life at sea, weather, navigational safety or military instructions) should allow any of their seafarers to choose not to proceed to the high-risk zone by allowing any such seafarers to leave the ship (or not to join it) at a preceding port.

The agreement further recommends that operators of ships in the zone should make special payments to all crew members of 100% of normal pay. The special payments should be payable in half-day increments, in respect of each day or half-day during which the ship is in the zone, in recognition of higher risks associated with transiting this area, and the payments should be in addition to all other remuneration earned. However, where operators arrange military escorts for their ships, or on-board security teams to provide continuous monitoring and protection during the transit of the high risk zone, they are deemed to have mitigated the risks such that the special payments need not be paid.

This news is a total 755 time has been read