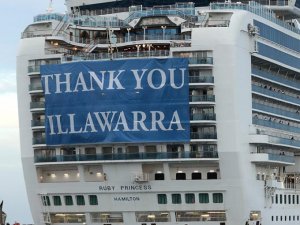 The Ruby Princess cruise ship has departed Port Kembla, New South Wales, following the conclusion of the joint operation to facilitate the movement and repatriation of crew members to their home countries.

The coronavirus-hit vessel left Port Kembla at about 4.30pm (local time) on 23 April.

After docking and disembarking in Sydney last month with 2,647 passengers and more than 1,000 crew members on board, Ruby Princess is believed to have become Australia’s biggest source of COVID-19.

For weeks, the US-based cruise line Princess Cruises, which owns and operates Ruby Princess, was struggling to repatriate the crew members on board the ship on compassionate and humanitarian grounds.

According to the police, local authorities coordinated the disembarking of 368 Filipino nationals from the Ruby Princess at Port Kembla on 23 April.

Eleven of those crew members, who tested positive to COVID-19, were taken to NSW Health-managed hotels to enter quarantine.

The remainder were taken to Sydney Airport ahead of their return to the Philippines tonight.

Over the last three days, a total of 542 crew members have been escorted from the ship to be repatriated to their home countries.

This included a total of 33 crew members who were taken to NSW Health-managed hotels to be cared for in isolation until they can be medically cleared.

Once these crew members have recovered – and subject to medical clearance by NSW Health – they will be transported to Sydney Airport to fly back to their countries of origin, the police added.

The remaining crew members have departed on board the cruise ship.

Earlier this month, the NSW Police Force commenced a criminal investigation into the circumstances surrounding the arrival of Ruby Princess. Detectives have seized the ship’s black box and are conducting inquiries and gathering other information as part of the investigation.

Another cruise vessel operated by Princess Cruises visited two Australian ports in March. The ship, Pacific Princess, arrived at the Port of Los Angeles, California, earlier this week. It docked in LA to disembark 119 passengers with no COVID-19 positive cases or illness onboard, Princess Cruises said.

“Of the 119 passengers who remained onboard, 109 were deemed, under IATA medical clearance guidelines, to be medically unfit to undertake a long-haul flight back to the United States from Australia (for reasons unrelated to COVID-19),” the cruise line informed.

Pacific Princess departed Port Everglades in Florida on 5 January for a 111-day World Cruise. In response to the global spread of COVID-19, Princess Cruises announced a voluntary 60-day pause of operations on 12 March. The company ended a segment of the current cruise early on 21 March, disembarking most guests in Fremantle, Australia. After departing Fremantle the ship made two service calls, one at Melbourne, Australia and one at Honolulu, Hawaii.

This news is a total 245 time has been read
Tags: Australia , Coronavirus , Princess Cruises , Ruby Princess