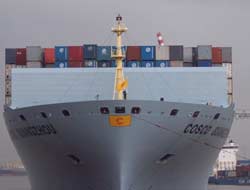 COSCO Asia, designed with a nominal capacity of 10,050 teu, is the first of four of these mammoth vessels being built for COSCO Container Lines by HHI.

The last of the four ships from this series is scheduled to be delivered by the middle of next year.

All of the post-Panamax-sized container ships constructed in Korea for Chinese owners, including this latest series, have been built to Lloyd's Register class. While COSCO Asia is the first in Asia to break the 10,000-TEU barrier, its delivery on August 6 will continue the trend which has seen owners and builders select Lloyd's Register when upsizing to the next generation of container ships.

"COSCO Asia is a Korean milestone, being the country's first 10,000 TEU container ship. With the successful completion of the ship, HHI has further increased its lead in the world's large containership market," says Hong Sung-il, Vice-President of the Shipbuilding Division for HHI.

HHI now has the world's largest orderbook of containerships, with 160 on order, including some 30 of 10,000 TEU and over.

Orders for super post-panamax containerships--those above 7,000 TEU--have soared in recent years and now account for 37 percent and 38 percent of the orderbook by slot capacity and gross registered tonnes, respectively, according to data from Lloyd's Register-Fairplay.

Recent analysis by Lloyd's Register indicates owner-operators may see unit cost savings as high as 35 percent when upsizing from a 6,800 teu vessel to 11,800 teu. Provisional plans emerging from some of the world's leading design houses suggest vessel capacities may reach 12,500 TEU, while still being able to transit the new dimensions of the Panama Canal after its present enlargement project is completed in 2014