Cosco Boxship Hit by a Fire 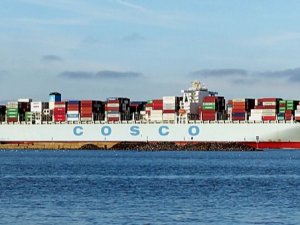 A fire broke out on board Cosco Pacific, a very large containership owned by Cosco Shipping, while the vessel was underway from Port Klang, Malaysia to the largest container port in India, Nhava Sheva Port on January 4, 2020.

As informed by COSCO in a customer advisory, the fire, which broke out in one of the 10,000 TEU ship’s cargo holds, has been put under control. However, the extent of the damage is unknown.

There have been no injuries reported to the ship’s crew.

Due to the fire, the Chinese-flagged ship was diverted to Colombo for inspection of the cargo and safety of the ship.

The affected cargo is likely to be unloaded at the port, where some of it may be retained, the company said.

The suspected cause of the fire is reported to be misdeclared or undeclared dangerous goods.

The incident is expected to cause delays and schedule interruptions on the boxship’s trade route between China and India.

This news is a total 587 time has been read
Tags: COSCO Pacific, COSCO Shipping, fire.