COSCO calls on Port of Savannah 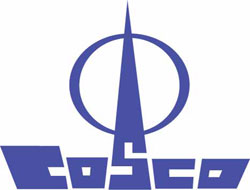 COSCO calls on Port of Savannah

Beijing, China-based COSCO is a $17 billion company with a merchant fleet of more than 600 vessels, moving more than 300 million tons annually.

The first COSCO vessel to call on the Port of Savannah, M/V Zhen He, arrived at the GPA"s Garden City Terminal on May 10. Prior to the Zhen He"s arrival, COSCO moved cargo through Savannah on alliance carrier vessels. COSCO along with K-Line, Yang Ming and Hanjin comprise the CKYH Alliance.

?We appreciate COSCO"s confidence in our ability to handle its container volume now and in the future,? Marchand said. ?The Port of Savannah offers a logistically friendly location with two on-terminal rail providers and immediate access to two interstate highways, which helps us attract additional cargo in a challenging economy. We welcome COSCO and look forward to working closely with them.?

Georgia"s deepwater ports and inland barge terminals support more than 286,476 jobs throughout the state annually and contribute $14.9 billion in income, $55.8 billion in revenue and $2.8 billion in state and local taxes to Georgia"s economy.

This news is a total 3728 time has been read