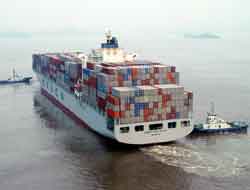 China COSCO Holdings (1919), the Hong Kong-listed arm of the mainland's largest shipping conglomerate, may purchase 400 bulk vessels from its parent following its A-share listing in the first half of this year.

COSCO in talks to buy 400 bulk vessels from parent

China COSCO Holdings (1919), the Hong Kong-listed arm of the mainland's largest shipping conglomerate, may purchase 400 bulk vessels from its parent following its A-share listing in the first half of this year.

The company said in a statement to the Hong Kong stock exchange that it is in negotiations to acquire bulk vessels from its parent, COSCO Group.

The state-owned conglomerate, which has a fleet of 700 vessels - including dry bulk carriers, oil tankers and container ships - is following government policy to publicly list all of its key assets, China COSCO vice chairman Zhang Fusheng said in Hong Kong Thursday.

President Chen Hongshen gave no details of the timing or funding method for the acquisition.

The subsidiary plans to issue up to 1.5 billion A shares to raise 7.7 billion yuan to purchase 12 new container vessels and acquire a 51 percent stake in the logistics business of its parent in the first half.

China COSCO shares rose 0.84 percent to close Thursday at HK$ 7.24. The stock has doubled over the past six months, benefiting from speculation over its A-share listing and assets injection from its parent.

Market observers maintain a positive outlook on the injection, which is expected to take place in the second half.

"We view China COSCO as the premier flagship shipping conglomerate in China, which deserves to trade at a premium to peers," JPMorgan analyst Christie Ju wrote.

The profit was in line with JPMorgan's forecast of 2 billion yuan, but fell far below Goldman Sachs' prediction of 2.61 billion yuan. Earnings per share were 33 fen, compared to 1.088 yuan the previous year.

This news is a total 1618 time has been read