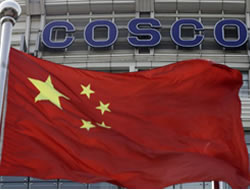 The tide may be turning for state-backed shipping company China COSCO Holdings Co Ltd as a slower influx of new vessels and an uptick in global trade begin to lift the industry from its longest slump in three decades.
COSCO, China’s top shipping line, is expected to return to substantial profitability in 2015 after five lean years, Reuters data shows. Its first-half results, due later on Thursday, are widely expected to show a loss of up to 3.2 billion yuan ($520 million) due to weak freight rates and shipping volumes.
The global shipping industry has been stuck in its longest slump in three decades after too many ships were ordered in the years before the global financial crisis, leaving a capacity glut that sunk freight rates and hit carriers’ earnings.
But observers say the market is getting back into balance and may be nearing a recovery, as evidenced by recent stronger-than-expected results from smaller carriers such as Orient Overseas International.
“The supply and demand’s behaving better, there’s been less ships being delivered this year,” said Jefferies analyst Bonnie Chan. “Demand’s actually holding up pretty well on both dry bulk and container.”
Analysts on average expect COSCO, which oversees China’s largest dry bulk fleet, to report net income of 1.02 billion and 2.36 billion yuan in 2015 and 2016, respectively. The company squeezed out a slim profit in 2013 by selling properties to its parent, enabling it avoid a delisting.
COSCO declined to comment.
While overcapacity is still an issue, global fleet growth has slowed thanks to falling deliveries from China, which makes most of the world’s ships.
Chinese shipbuilders delivered 20.66 million dead weight tonnage of new ships from January to July, a 21.5 percent decrease from a year earlier, the China Association of the National Shipbuilding Industry said on Aug. 22.
Companies such as COSCO have also been taking advantage of a government programme that offered incentives for scrapping ships, allowing them to restructure their fleets and make them more efficient. COSCO sent more than 20 ships to the scrapyard in the first half of the year.
As the supply of ships falls, there are signs that demand is picking up. After a weak start to the year, China’s exports grew nearly twice as much as expected in July, driven by firmer demand from the United States and Europe.
The Baltic Dry Index, which tracks the price of moving goods such as coal and iron ore by sea, picked up to hit a four-month high in August after being on a mostly downward trend since the start of the year, suggesting that demand for shipping services is growing.
Any rebound in China’s real estate market may also benefit COSCO. Haitong Securities analyst Jiang Ming wrote in an Aug. 19 note that recent moves by the Chinese government to relax property market controls could push the Baltic index up a further 50 percent beyond the 1500 level before the end of 2014, as it would drive up import demand for iron ore used in steel.
Optimism could quickly fade, however. Factors such as rising fuel prices could derail the recovery, as well as continued volatility in freight rates, which saw the BDI sink to its lowest level since January 2013 in July.
“At the beginning of the year everyone had an optimistic outlook for dry bulk shipping,” said UOB Kay Hian analyst Lawrence Li. “But freight rates, particularly in the second quarter, have been substantially below expectations. There is a lot of noise around the sector.” (1 US dollar = 6.1440 Chinese yuan).
Thomson Reuters
http://turkishmaritime.com.tr
This news is a total 4456 time has been read