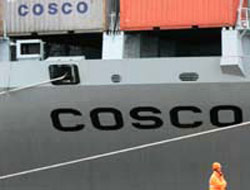 China Cosco Holdings has reported a steep first half loss of Yuan4.6bn ($673m).

China Cosco Holdings has reported a steep first half loss of Yuan4.6bn ($673m).

That compared with a Yuan15bn profit a year earlier.

China Cosco"s figures were dragged down by its dry bulk revenues, which plummeted 71.7% year-on-year to Yuan11.1bn.

The group"s container shipping division fared slightly better with revenue down 56% to Yuan8.8bn, excluding the income from chartered out vessels.

China"s largest shipping group warned that conditions in the second half were expected to remain tough amid the continued decline of global trade.

?In the face of the significant over-supply and re-surging oil prices, it is expected that the operational conditions for the second half of the year will remain difficult,? the company said on Thursday.

The company warned in July that of a first-half loss as both its bulk cargo fleet, the largest in the world, and its containership operation, the world"s number six, recorded losses.

This news is a total 1583 time has been read