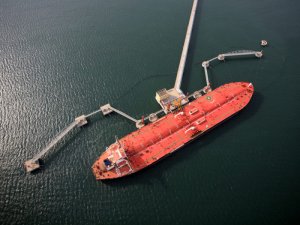 South Korea’s top refiner SK Energy chartered a supertanker, Maxim, to ship U.S. crude to South Korea in November for $10 million, the highest price for a U.S. Gulf-to-Asia shipment ever, two sources familiar with the matter said. SK could not be reached for comment.

One of the units – COSCO Shipping Tanker (Dalian) – owns and manages at least 36 tankers for crude and refined products, including 18 supertankers or very large crude carriers (VLCCs), according to shipping sources and Refinitiv data.

Earlier this week, suggested rates for VLCCs, which can carry around 2 million barrels, from the U.S. Gulf Coast to China vaulted to $9.8 million, up from $6.2 million in early September, according to ship broker McQuilling Services.

Friday’s highest quote was at $9.5 million for charterer Atlantic Trading & Marketing, a unit of Total SA, to book a VLCC from the U.S. Gulf Coast to China, shipbrokers said. The deal did not go through, the brokers said, and Atlantic Trading declined to comment.

The Coswish Lake had anchored off Corpus Christi, Texas, since Sept. 23 and departed on Sunday without loading crude, according to Refinitiv Eikon data.

SK Energy also replaced a COSCO-operated supertanker, Cosmerry Lake, with two Suezmax-class tankers, which can carry about 800,000 to more than 1 million barrels, the Stena Supreme and Sonangol Portoamboi, shipbrokers said.

The surge in freight costs has narrowed the window to profitably export U.S. crude to Asia and left some U.S. crude exporters reluctant to book vessels at the higher rates. That could limit November loadings and exports unless more vessels become available in coming weeks, traders said.

“People are nervous about locking freight in at these high levels, which is why the last week has been so quiet,” one U.S. crude oil trader said.

The rise in freight rates is driving up crude costs for Asian refiners and threatening to make shipping oil to Asia unviable, traders said.

“Currently, West African and Latin American crude are too expensive,” a source with a North Asian refiner said. Economics of U.S. crude are good, but freight has become an issue, the source said.

Buyers may turn to more crude from the Asia Pacific and Middle East, which have shorter shipping distances, or spot premiums for long-distance cargoes will have to fall to displace the higher freight costs, a Singapore-based trader said.

This news is a total 209 time has been read
Tags: China, cosco tanker sanctions, tankers