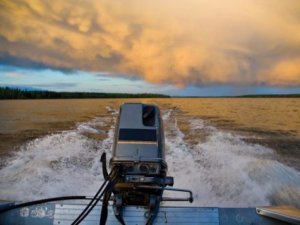 Maritime industry has witnessed significant changes in the past couple of years. Presently, the industry appears to be partly driven by a paradigm shift in consumer demand from cruisers to day boats.

Maritime industry has witnessed significant changes in the past couple of years. Presently, the industry appears to be partly driven by a paradigm shift in consumer demand from cruisers to day boats. Owing to excellent versatility and ease of use, most of the small vessels are equipped with marine outboard engines. However, marine outboard engines with high end features comes with an inflated price tag, a budding challenge faced by the boat builders.

Outboard engine manufactures are capitalizing significantly on R&D endeavors to strike a perfect balance between cost and features. Although new outboard engines may be pricier than its predecessors, it typically incorporates technologies that enhance fuel economy and reduce service costs, thereby lowering the overall cost of ownership. Owing to the multiple advantages of marine outboard engines, coupled with rapid technological advancements and growth of maritime tourism, the market is foreseen to auger well over the forecast period, reveals study. The report estimates that the marine outboard engine market will witness a fourfold growth and reach a valuation of ~US$ 5.3 Bn by the end of 2029.

According to the report, fishing Vessels will be the most favorable vessels for marine outboard engines, however recreational vessels will register significant growth across the forecast period.

Demand for Four Stroke Electronic Fuel Injection is expected to grow 1.3X over the next decade owing to the better price to performance ratio

North America will remain the most prominent region across the forecast period, accounting for more than 45% share of the global market.

“A smooth introduction of newer technologies is in the interest of all countries, introduction of novel engine designs with lower emissions and improved performance and reliability will open new growth prospects for marine outboard engine manufactures”, says the analyst.

In February 2018, Honda Motor Co., Ltd. redesigned and improved BF200, BF225, and BF250 V6 outboard motors with features such as Intelligent Shift and Throttle (IST) and mechanical control options which enables the operator to fine tune throttle settings at any speed

In May 2018, Yamaha Motor, in North America announced the launch of F425A/FL425A outboard motor engine with 425 horsepower. The launch helped Yamaha to cater to the demand of high capacity (over 100HP) marine outboard engines

Adoption of policies such as single fuel concept (SFC) from Department of Defense (DOD) is also expected to coax outboard engine manufactures to launch new products.

This news is a total 648 time has been read
Tags: Sea News Feature, Cost-effectiveness of Marine Outboard Engines is Foreseen