Cost of shipping may advance 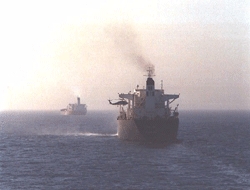 The cost of shipping Middle East crude to Asia may advance next week, with demand bolstered by the return of Chinese traders from holidays and the first bookings for November cargoes.

The cost of shipping Middle East crude to Asia may advance next week, with demand bolstered by the return of Chinese traders from holidays and the first bookings for November cargoes.

Refineries need to hire about 15 more VLCCs to load in October, according to a report yesterday from Barry Rogliano Salles. There are 51 available vessels that can get to the Middle East by the end of the month.

A rate of 140.5 Worldscale points equates to $91,217 in daily rental income after fuel and port costs are paid, according to the Baltic Exchange's calculations.

Frontline Ltd., the world's biggest operator of VLCCs, said Aug. 21 it needs $31,400 a day to break even on each of its supertankers.

This news is a total 732 time has been read