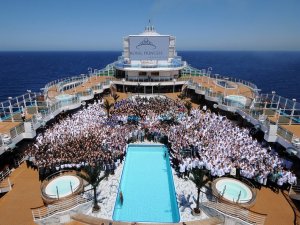 The deceased are young female seafarer on board Princess Cruises-operated Regal Princess and a young crewmember of the Royal Caribbean’s Mariner of the Seas.

“Whilst we await the outcome of the investigation it appears that the young Ukrainian seafarer took her own life in the Port of Rotterdam whilst awaiting repatriation home. We are currently seeking more information about the circumstances of the man’s death on board the Mariner of the Seas,” the ITF said.

As informed, the Regal Princess arrived in Rotterdam on 6 May for the final phase of the repatriation process, and seafarers on board including the deceased woman were scheduled to return home on a charter flight on 8 May but it was cancelled. Crew members were told that the next available flight on 12 May, but tragically the women jumped from the ship and died after her chartered flight home was cancelled.

Four crew members have now reportedly ended their lives in less than two weeks. On 9 May, a Carnival team member from Hungary died on board the Carnival Breeze with his fellow crew members finding him dead in his cabin. This followed the death of a Royal Caribbean crew member from Poland who jumped overboard from the Jewel of the Seas on 30 April.

Due to the shortage of international air travel and government restrictions, and ports applying additional restrictions to seafarers working on cruise ships, getting seafarers home is very challenging and thousands of workers have been forced to remain onboard their ships.

“Seafarers are being penalised by the strict restrictions put in place by governments to contain the spread of the virus despite no justification or scientific proof that seafarers on cruise vessels pose any greater risk than other categories of workers or members of the public,” David Heindel, ITF seafarers’ section chair, commented.

Approximately 150,000 seafarers are currently waiting to leave or join ships, with tens of thousands currently trapped onboard ships across the globe due to the continuing imposition of travel bans.

Seafarers’ unions are calling for the same response from governments which facilitated the repatriation of tens of thousands of passengers in a matter of weeks from cruise ships around the world.

“It’s time for crews to be treated as humanely as passengers were. The ITF and our social partners warned just last week that failure to do so risks the wellbeing of seafarers, maritime safety, as well as the supply chains that the world relies on. Time has come to get these seafarers’ home before we see more people taking their lives,” Heindel added.

The International Maritime Organization (IMO) has put together a set of protocols of which Member States and international organizations are encouraged to make use and disseminate it among relevant national authorities. Governments should then make appropriate adjustments to any current health and immigration protocols and identify key airports that seafarers can use for crew changes so that the airlines can help keep global logistics moving.

In an effort to help repatriate distressed seafarers, Global Marine Travel (GMT) has partnered with The International Maritime Employers’ Council (IMEC). In line with IMO recommendations, the duo aims to amalgamate the shipping industry’s crew travel requirements to produce enough volume for airlines to bring idle aircraft into operation.

Jointly, they have created a crew survey for ship managers and operators to complete.

Based on need, GMT will then organize blocks of seats on scheduled carriers, seek extra sections or larger aircraft on routes, and even organize chartered flights.

This news is a total 2278 time has been read
Tags: Coronavirus , cruise ship , ITF , seafarers