COVID-19 Cases On the Rise at NNS and Ingalls Shipbuilding 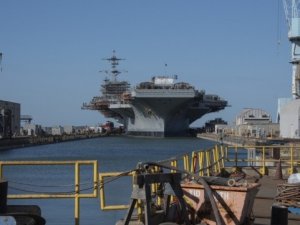 The yards are critical to the U.S. Navy. Ingalls supplies amphibs and Arleigh Burke-class destroyers, the workhorses of the surface fleet. NNS is the world's only builder of nuclear-powered carriers, and it is currently working on delivering the next-generation Ford class. They have remained open despite the challenges of the COVID-19 era, and NNS president Jennifer Boykin said Wednesday that that will not change.

"At the beginning of the pandemic, we made a lot of changes in a relatively short period of time . . . we’ve since learned that COVID-19 will likely be with us until a vaccine changes the spread. This is the hard reality we are all dealing with," said Boykin. "The only way to totally stop exposure to the virus in the shipyard would be to close our doors for the foreseeable future. With that comes unemployment for 25,000 shipbuilders, a delay in Navy ship production, and the potential loss of future work. The ramifications of doing something so extreme will impact our community and our nation longer than this virus ever could. My responsibility is to balance how to keep the business operational while doing all we can to slow the spread of the virus."

In keeping with input from the workforce and guidelines from the CDC, she said, NNS will resume its three-shift schedule instead of its temporary two-shift arrangement effective August 16. "Our operations will appropriately evolve as we learn more about the virus," she said in a message to the yard's workforce.

The outbreak at Ingalls Shipbuilding - one of Mississippi's largest employers - has drawn high level attention from the state's government. "You know, it only takes an outbreak of that magnitude and that size, if you have 100 new patients and 17 of them need to be hospitalized, it can take up all the ICU beds in a county . . . very very quickly, so I am concerned by it, and we are continuing to monitor the situation," said Mississippi Gov. Tate Reeves at a press conference Wednesday.

On Monday, Newport News also had a shipboard fire to contend with. A blaze broke out in one compartment aboard the new aircraft carrier John F. Kennedy at the yard's Pier 3. The fire was put out quickly and was contained to the single compartment where it originated, but it did produce heavy smoke, NNS president Jennifer Boykin said.

"I want to thank everyone who responded [Monday]. Your quick thinking and prompt actions kept people safe, prevented injuries and minimized damage to the ship. You have my commitment that we will learn from this, and we will share our lessons learned – not just at NNS – but across all Navy shipyards," she said.

The incident follows shortly after the devastating fire aboard the USS Bonhomme Richard at Naval Base San Diego, which left the vessel so damaged that it is uncertain whether it will be economical to repair. The Navy has ordered commanders across the fleet to review their firefighting preparedness and fire safety protocols.

The USS Kennedy was christened in December and is in pre-commissioning with a Navy crew.

This news is a total 1659 time has been read
Tags: COVID-19 Cases On the Rise at NNS and Ingalls Shipbuilding