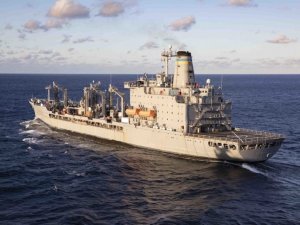 At least 18 crew members on board the Military Sealift Command ship USNS Leroy Grumman have tested positive for COVID-19 in Boston, CBS Boston has reported.

The fleet replenishment oiler USNS Leroy Grumman (T-AO 195) has been docked in Boston since February to undergo scheduled repairs and overhaul. The ship is currently in dry dock at Boston Ship Repair.

All 50 crew members on board the ship have been quarantined, the CBS Boston report said.

The USNS Leroy Grumman is typically crewed by about 74-89 civil service mariners.

The ship is named after American aeronautical engineer and founder of the company now known as Northrop Grumman.

This news is a total 699 time has been read
Tags: coronavirus, MSC, U.S. Navy UK and UN Will Host First Summit to Address Challenges of Crew ChangesThe U.K. Government joined in the worldwide efforts to mark the Day of the Seafarer and recognize the vital contribution of seafarers to keep the global economy function.