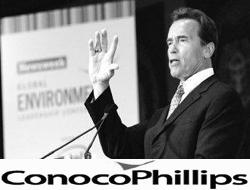 ConocoPhillips became the newest member of the U.S. Climate Action Partnership, an alliance of big business and environmental groups that in January told President Bush that mandatory emissions caps are needed to reduce the flow of carbon dioxide and other heat-trapping gases into the atmosphere.

"We recognize that human activity, including the burning of fossil fuels, is contributing to increased concentrations of greenhouse gases in the atmosphere that can lead to adverse changes in global climate," said Jim Mulva, ConocoPhillips' chairman and chief executive.

Mulva said the company was allocating "significantly more resources" to help develop alternative and renewable sources of energy and was committed to reducing emissions at its own plants. ConocoPhillips has said it will spend $150 million this year to research and develop new energy sources and technologies -- a 50 percent increase in spending from 2006.

Mulva's call for mandatory limits on greenhouse gases is an abrupt departure from his views on the issue as recently as January.

Mulva acknowledged in an interview at the time that all types of efficient energy sources were needed but said market forces and consumer preferences, not federal requirements, should determine how they're used.

Now, he says ConocoPhillips believes that a "mandatory national framework" is the most likely way to reduce global greenhouse-gas emissions, although he said it was too soon to say what type of caps should be imposed.

John Parry, a senior analyst at energy consulting firm John S. Herold Inc., said ConocoPhillips' new stance conveys to the public that the company is concerned about global warming, and it gives it the chance to help shape legislation.

"I say, 'Arnold to Michigan: Get off your butt and join us.'"

California Gov. Arnold Schwarzenegger is seeking U.S. permission to force drastic cuts in carbon dioxide and other greenhouse gases from tailpipe emissions. He spoke Wednesday at the Global Environment Conference at Georgetown University.

Schwarzenegger's jab Wednesday at automakers echoed a jeer at the former Hollywood actor by Rep. Joe Knollenberg, R-Mich., who paid to erect a billboard in Detroit that says "Arnold to Michigan: Drop Dead!" Knollenberg has said Schwarzenegger's proposals to clean emissions and boost mileage for California vehicles would cost U.S. automakers $85 billion.

This news is a total 638 time has been read