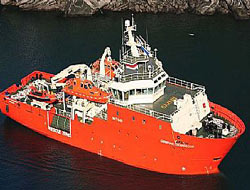 Global shipping and energy services company, The Craig Group, is rounding off its 75th anniversary celebrations with the announcement of strong results for the year ending April 2008.

Global shipping and energy services company, The Craig Group, is rounding off its 75th anniversary celebrations with the announcement of strong results for the year ending April 2008.

The privately-owned group has achieved turnover in excess of £110 million with continued growth forecast for 2009.

Turnover for 2008 was £113 million with profits of £16.7 million. Reported profits show a total of £72.6 million which includes the gain on the sale of three divisions - Seatronics, International Mooring Systems and ChainCo. The net debt has been reduced to £6.6 million from £53.6 million, principally due to the net proceeds from the sale of those divisions.

Group turnover from continuing operations increased to £106 million from £102 million in the previous year and operating profit from £7.6 million to £10 million, representing an increase in operating margin from 7.4% to 9.4%.

"These accounts show that we have achieved significant growth in our core operations, all of which are profitable and currently enjoying further growth which puts us well on target to deliver equally robust results in 2009. With very low gearing and a renewed focus on our primary business of offshore support vessels and international oilfield procurement, we are well positioned for long-term sustainable growth," said Douglas Craig, managing director of The Craig Group.

The group continued to invest in new vessels, technology and people with capital expenditure during the period standing at £16.8 million. The investment in North Star's fleet in recent years now exceeds £130 million, ensuring that it is one of the youngest and safest operating in the North Sea. All of the new vessels will be delivered by 2010.

The Craig Group remains one of Scotland's top 100 companies and in the top 20 of offshore service companies in the North Sea. Its divisions operate in the areas of offshore support, ROV survey, emergency response and rescue vessels, oilfield supplies, fishing and leisure. With operations in the UK, South Africa and the United States, the group provides employment for over 1,000 people.

This news is a total 708 time has been read