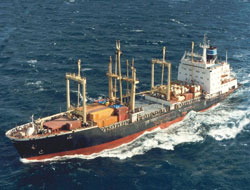 Traders are finding it harder to get letters of credit that guarantee payments for goods, shipping executives said. Together with a slowdown in trade, that has contributed to this year's 82 percent drop in shipping costs for grain, coal and other commodities.

Rates are so low that Zodiac Maritime Agencies Ltd., the line managed by Israel's billionaire Ofer family, announced today it may idle 20 of its largest ships.

''Nothing is moving because the trader doesn't want to take the risk of putting cargo on the boat and finding that nobody can pay.''

The Baltic Dry Index fell 11 percent today to 1,615, the lowest since February 2003. Rates for larger ships of the type Zodiac intends to idle fell 17 percent today, taking this year's plunge to 85 percent, according to the London-based Baltic Exchange.

Crude oil, industrial metals and grains have all slumped since reaching records in July on concern the worst financial crisis since the 1930s will cause a global recession. The Standard & Poor's Goldman Sachs Commodity Index has dropped 45 percent from its all-time high of 890.28 on July 3.

''Our customers are facing hard challenges,'' Isabella Loh, chief executive officer of Shell Marine Products, a unit of Royal Dutch Shell Plc, said at a conference in Singapore today. ''The credit crunch has affected liquidity and is having an impact on shipyards with cancellations and postponed orders, and expansion may be on hold.''

Precious Shipping took as long as 15 months to secure financing for the 18 vessels it has on order, Hashim said. American Shipping Co. ASA can't get financing for two shuttle tankers that are part of its program to build 12 vessels.

Rio Tinto's share price fell as much as 18 percent to 2,334 percent in London trading today.

''Acquirers will find it harder to source funds and even if they can source funds, they'll have to pay more,'' said Steve Robinson, a senior investment manager with Alleron Investment Management in Sydney, which manages A$1.2 billion ($839 million).

''Given what's happened with commodity markets, they may not find buyers prepared to pay a premium.''

Zodiac will instruct the captains of its capesize vessels, which typically carry iron ore and coal, to deliver their current cargoes and then weigh anchor, said two hedge fund managers who saw an e-mail from the company outlining the plan.

''There's been a lot of credit problems with traders,'' said Mikael Skov, interim chief executive officer at Danish shipping line D/S Torm A/S, said by mobile today, without being able to give a figure for how many cargoes had been delayed or canceled. ''It's one more thing in a big negative melting pot for dry at the moment,'' he said.

This news is a total 940 time has been read