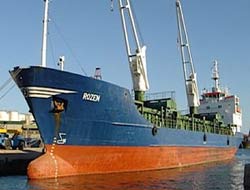 M/V Rozen that was freed last weekend after being held by Somali pirates for nearly 40 days was expected to dock in Mombasa last night.

M/V Rozen that was freed last weekend after being held by Somali pirates for nearly 40 days was expected to dock in Mombasa last night.

Seafarers Assistance Programme coordinator Andrew Mwangura said the ship was on its way to the port and would dock at the African Marine dry dock for major repairs.

In a press briefing yesterday, Mr Mwangura said the 12 crew members would be received by their families and other dignitaries this morning.

"On Thursday morning, relatives of the crew, the Sri Lankan ambassador, the director-general of the Kenya Maritime Authority, the harbour master, and officials of the World Food Programme will receive the ship and crew," he said.

M/V Rozen had been contracted by WFP to carry 1,800 tonnes of food aid from Mombasa to Berbera and Bossaso in north-eastern Somalia.

But the vessel, owned by Motaku Shipping Company of Mombasa, was hijacked off Puntland on February 25 while on its way back to Mombasa.

This news is a total 821 time has been read