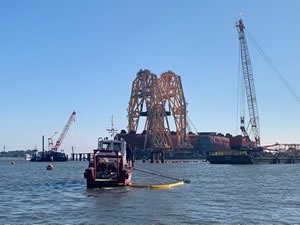 Crews working to cut up and remove the Golden Ray in St. Simons Sound, Georgia have started cutting the stern section, known as “Section Eight”.

The cutting comes after crews successfully cut off and removed the bow section in November, marking the first section to be removed. Crews have since been working on modifications to make the operation more efficient based on lessons learned from the first section.

“We are confident that the time invested to implement modifications to the cutting apparatus as well as perform critical maintenance to the wreck removal equipment will contribute to a safe and efficient cutting operation.” said Incident Commander Chris Graff of Gallagher Marine Systems, “We are ready to mitigate expected debris and other potential threats. The operation may be loud at times and please respect the safety zones around the wreck site.”

The next cutting comes after divers completed the drilling of additional drainage holes along the stern of the Golden Ray in order to maintain stability and even distribution of weight when lifted.

A 150-yard safety zone around the Environmental Protection Barrier has increased to 200 yards for recreational vessels. The Unified Command advises mariners to please steer clear of the perimeter and also continues to phohibit any unauthorized usage of drones around the wreck site.

The Unified Command has a flotilla of up to 36 vessels outside the EPB to monitor and protect against any pollution that escapes into the environment.

The Golden Ray was carrying about 4,200 vehicles when it lost stability and grounded in St. Simons Sound in Georgia as it departed the Port of Brunswick in September 2019. All vehicles remain inside the ship’s cargo holds and are being cut along with the wreck’s hull.

This news is a total 4237 time has been read
Tags: Golden Ray, salvage